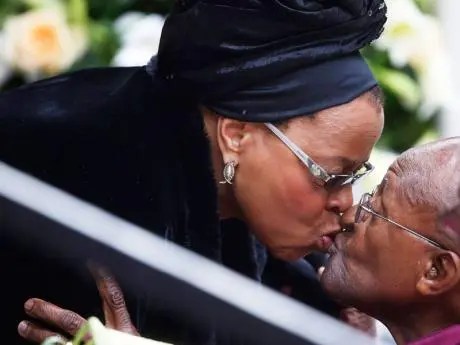 Graça Machel, the wife of former president Nelson Mandela, has described the late Archbishop Desmond Tutu as someone who lived every minute shaping the course of history.

Machel released a statement through the Graça Machel Trust on Sunday evening.

“To the young generations of South Africa, Southern Africa, and Africa – it is in your hands now to cultivate your own outstanding leadership to meet the challenges of your time,” said Machel.

“You have your own historic mission at hand. Take inspiration from Arch’s life to carve out your own legacy.

“Day by day, minute by minute, every step he took he was shaping the course of history. Every sentence he spoke impacted the lives of millions, and both unified and empowered those in the noble struggle against apartheid.

“How momentous a weight this must have been to shoulder. And yet he stood resolute and fearless, leading demonstrations cloaked in his flowing clerical robe with his cross as his shield – the embodiment of humankind’s moral conscience.”

Mourning Archbishop Desmond Tutu: The week ahead
Tutu IP Trust and the Desmond and Leah Tutu Legacy Foundation on Sunday confirmed arrangements for the week ahead.

The foundations expressed appreciation “to people and organisations across the country and the world for the outpouring of love, respect and condolences that followed the Arch’s passing”.

Mourning Archbishop Tutu
Events planned for the week ahead
While arrangements for a week of mourning are still in their infancy, below are a number of confirmed events for the coming week.

The Archbishop of Cape Town, Thabo Makgoba, asks all who hear the bells to pause their busy schedules for a moment in tribute to Archbishop Tutu.

Memorial service
On Wednesday, the Diocese of Pretoria and the South African Council of Churches will hold a memorial service in the capital city.

Additional details will be announced in due course.

Evening with friends
On Thursday evening, the Archbishop Tutu IP Trust and the Desmond & Leah Tutu Legacy Foundation will host an intimate evening with the friends of the Arch and Mrs Tutu.

Additional details will be announced in due course.

Lie in state
On Friday, Archbishop Tutu will lie in state in St George’s Cathedral.