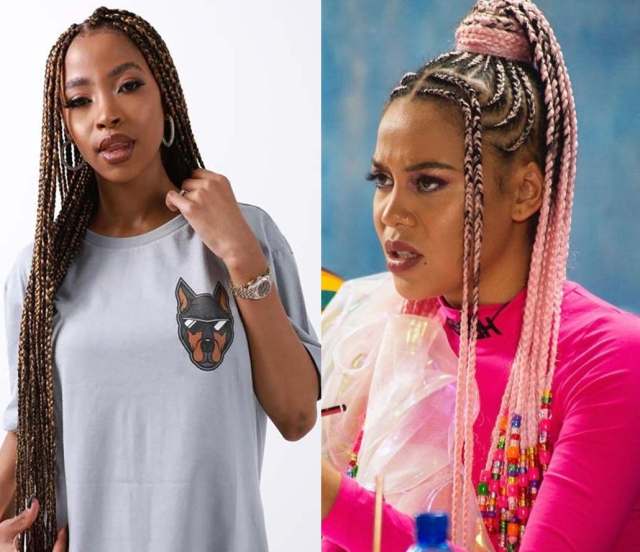 Mzansi musician Sho Madjodzi has been dragged into the unfolding saga of the toxic relationship between AKA and his late fiancée Anele Tembe.

The publication has learnt that Tembe was embroiled in an exchange of unpleasant messages with Sho Majodzi and Matheba over late-night calls and private-part selfies.

The explosive details were leaked by AKA and Anele’s acquaintances, who have been exposing the couple’s toxic relationship.

The acquaintances, who did not want to be named for fear of victimization, said Anele sent Sho Madjozi a Whatsapp message in October last year after accusing her of phoning the award-winning rapper in the middle of the night when they were sleeping.

The deep throat said Sho Madjozi, who is also known as Maya, had apparently phoned AKA to discuss the music video they were supposed to shoot for their collaboration single titled Casino.

The mole said because of that Whatsapp message, Sho Madjozi pulled out of the shoot, resulting in AKA suffering financial loss.

“Drama started when Madjozi was out at a nightclub in Kenya and heard their song play. Out of excitement and surprise, as she was not expecting their song to have reached Kenya’s finest DJS, she called AKA to make him listen to how the crowd was responding to their work.

Little did she know that AKA’S fiancée Nelly did not take the call well,” said the tipster.

It is alleged that two days later, she sent a message to Sho Madjozi’s manager, Shawn Nkuna, and asked him to forward it to Sho Madjozi.

The message reads: “From my understanding Kiernan and Maya work together, which is strictly business … so what I would like to know is why the f***t was she calling my man at 1am in the morning, and what was so urgent. In fact, I would like her to [send me a] message and explain her story.”

A source close to Sho Madjozi said she felt insulted over the drama. “She was angry that Anele was treating her like a loose woman who was after her man.”