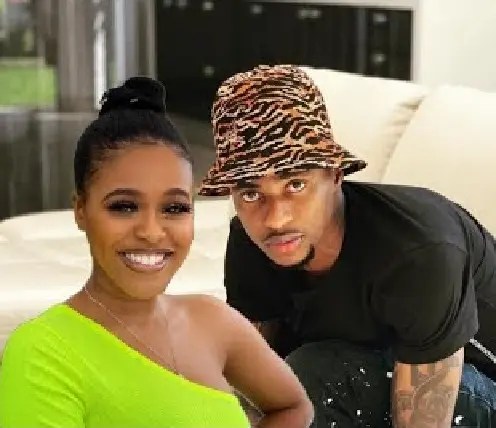 Social media users took to the streets yesterday to troll Blood and Water actress Natasha Thahane after her alleged baby daddy and Orlando Pirates player Thembinkosi Lorch cheated on her with Thandi Make.

Twitter users said they’ll only pity the actress after she pays back the money she received from the government to study overseas.

Controversial entertainment reporter Musa Khawula took to social media yesterday to inform tweeps that soccer player Thembinkosi Lorch is cheating on Natasha Thahane with Thandi Make.
This is after Thahane revealed a few weeks ago that she recently gave birth to her first child and has began filming season three of Blood and Water..

Khawula’s followers alleged that Lorch might have cheated on Thahane after finding out that he’s not the father as the pair have not confirmed the identity of her baby daddy.

Thahane and Lorch have not tagged or spoken about each other on social media since she revealed she’s pregnant and after giving birth.

Khawula reported that the “other” woman in Lorch’s life is YouTuber and actress Thandi Make – who recently bagged an acting gig in SABC 1’s series Judas Kiss – where she played a gold-digging character called Beth.

The signs were always there😭 pic.twitter.com/aDxYiWSPnU

Until she pay back the money…aykhale

So Lorch finally found out that the baby isn't his

I wish lorch can cheat on Natasha until she understands that cellular is her type pic.twitter.com/lOTJqmtmuz

So who must date her ? 🤭 pic.twitter.com/BIV8NMmKG8

Congratulations Natasha Thahane for your Pregnancy… Bringing life to earth is a massive gift from God. May He grant you with many more to come. ❤️ pic.twitter.com/s7vsaHXr4D

Natasha: Lorch is the love of my life, I gave him my heart.

The problem with women, they are quick to fall pregnant, enjoy the relationship first before bringing a baby into it

And y'all enjoy the greatest dogs.. another problem with "celebrities " status is more important than their happiness had she settled for an ordinary guy she wouldn't be here buy nooo she went for a player

What do you mean women are quick to fall pregnant? I thought a baby was made by two people.