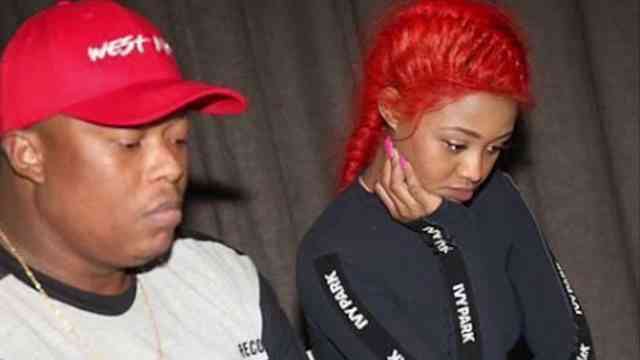 Babes Wodumo and her fiancé Mampintsha’s relationship has once again taken center stage following her intriguing interview with Mac G. In the sit-down interview, the Wololo hitmaker opened up about quite a lot of aspects about her life that made headlines in the past.

Nothing was off-limits from being a pastors kid to being engaged to an older man and her booming career when she started out. Even though many enjoyed watching the dancer and Gqom Queen, many were distracted by the fact that her husband Shimora called her almost every 20 minutes.

When he first called, Babes admitted that he always wants to guard her every move and wants to be filled in on what she does at every second. The “weird” and “obsessive behaviour” raised a few concerns from tweeps who are worried about Babe’s wellbeing.

Just 14 minutes into the interview, Shimora calls Babes to check up on her. The Gqom Queen then tells him that she is doing an interview and he should check her WhatsApp statuses to confirm. She then apologises for the interruption and says, “Sorry guys my boyfriend is always checking up on me.”

14min into the interview, didn't Mampintsha call to "CHECK" on HIS Babes Wodumo? 😂

Podcast and Chill with MacG pic.twitter.com/r7MrjoAmXJ

Social media has since gathered to either bash Mampintsha or defend his actions. Here are some of the reactions:

“If we being honest, Babes Wodumo is where she is career-wise because of Mampintsha. She herself said how influential Mampintsha is in the studio, just that Mampintsha is kind of possessive but that doesn’t mean they should break up, they should find a way to fix those insecurities.

“Also I wish people would stay out of Babes and Mampintsha’s business, Babes did say she was happy ngeSdudla sakhe.

“This really shows us that Mampintsha doesn’t trust Babes Wodumo.

“Yooo, this babes interview. Guys Babes is broken. O mampintsha broke her. He took her confidence, her identity, her self esteem, and she’s isolated.. He’s taken everything. Broken heart. I’ve never felt this sad about anyone. Oh my God.”

Mac G then asked her a burning question that has been on everybody’s lips, “Why is Mampintsha on every single song that you do?” She said that she is no longer signed under West Ink but he as her fiancé helps her with work whenever she might need it. “When I get my gimmick in studio he would always be around. So I would tell him things I want him to say.”

She further said she does feature other people but those big artists do not do what she wants in the studio so that is why she always wants to work with him.

"Why is Mampintsha on every single song that you do?"

This is Podcast and Chill with MacG pic.twitter.com/Mx7t9UxcNT