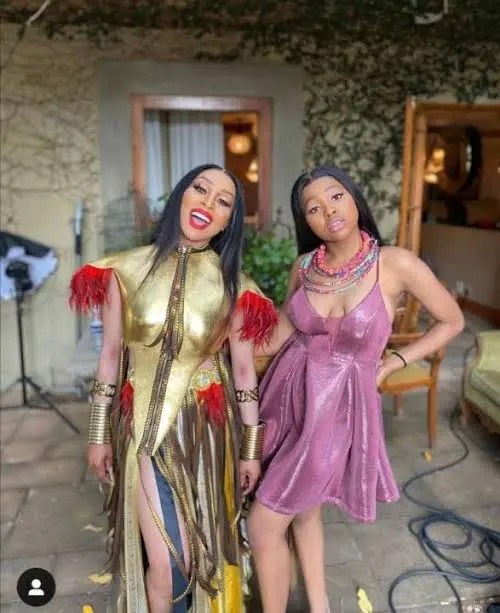 Not too long ago, Khanyi Mbau took to her Instagram to share how she and her family had taken the time to celebrate her father’s heavenly birthday. It has now been one year since they lost their father and friends, fans and fellow industry mates took their time to send their love and strength to the family.

Social media influencer, Lasizwe Dambuza, who is Khanyi’s half brother, had also taken to his twitter to share a video of the entire family posing for a photo during their weekend together.

What has now come from the video as you will see down below, is an uneasy Khanyi’s daughter, Khanukani, commonly referred to as Cannes.

In the video, Cannes is seen trying so hard to hide her tummy and now, tweeps seem to speculate that maybe, Khanyi Mbau is due to become a ‘gogo’. And while many are saying that maybe she was just being self conscious of how she looks, tweeps are pretty much convinced that Cannes could be pregnant.

This is how difficult it is to take a family photo… pic.twitter.com/EaRIKezJIT

Rumor or not, it seems this news is not sitting all too well with fans. Many are saying that Cannes is just a child and that she cannot be pregnant this soon. Others have gone ahead to echo this sentiment to say that maybe she had too much to eat that day and hence that is why her tummy is bigger than usual.

For the rest, they are simply saying that Cannes is really her mother’s daughter. If you can recall, Khanyi had given birth to Cannes at only 16 years, and so to say that her daughter is reportedly pregnant at only 13 years is still an unexpected shock to many in Mzansi.