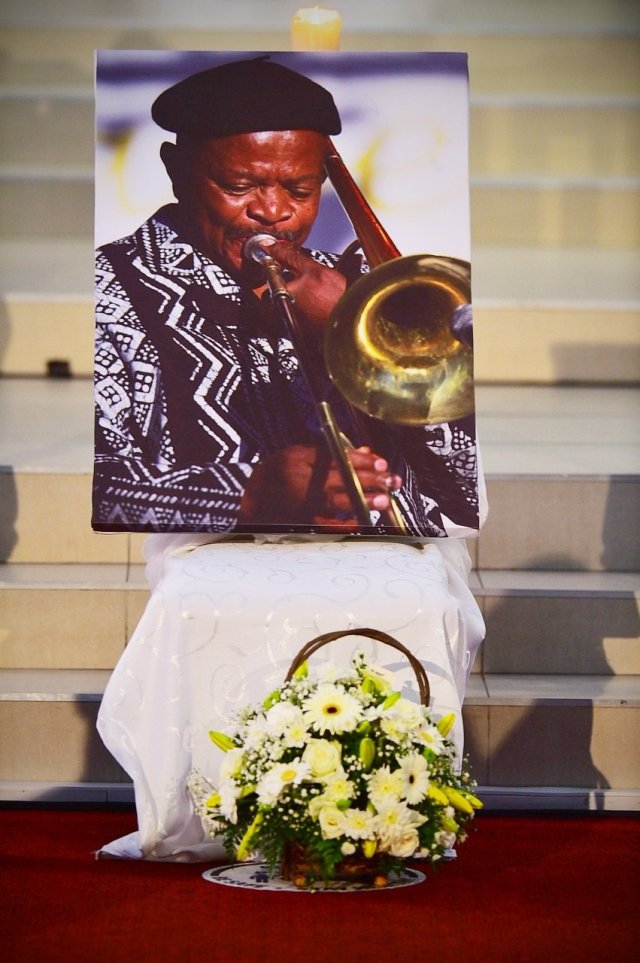 JAZZ legend Jonas Gwangwa was laid to rest at Fourways Cemetery in Joburg on Friday 29 January.

The burial took place in the early hours of the morning and was attended by close relatives only.

When the funeral service which was held at the Christ King Anglican Church in Sophiatown began, there was no coffin.

And due to the Covid-19 regulations that only allow 50 people to attend funerals, extra people such as journalists and the police had to stand outside.

Jazz legend and close friend of ntate Jonas, Caiphus Semenya, said he never thought that one day he would stand in front of a congregation to speak about him.

“Two years ago, I spoke at Hugh Masekala’s funeral to bid him farewell. Before that, Jonas, Hugh and I sang the song Hush at Miriam Makeba’s funeral. Another year, I was at ausi Dorothy Masuka’s funeral and another one I was at Sis Thandi Klaasen’s.

“I keep watching all these people that I grew up with in this business as each and every one of them depart. That’s why I say today is a spiritually complicated day for me because in my own mind I ask myself, why?

“Why had they left this world so soon when there was still so much for us to do in this beloved country of ours.”

He said he doesn’t know where the answer will be coming from but it is truly sad that all these giants of our music and art are passing away one at the time.
Caiphus said he met Jonas when he was a teenager.

He spoke of many memories they shared together.

The jazz legend and activist was honoured with a special provincial state funeral.

Among the dignitaries who attended the funeral was Arts and Culture Minister Nathi Mthethwa, deputy minister of Defence and Military veterans Thabang Makwetla and ANC spokesman Dakota Legoete.

Former parliament speaker Baleka Mbethe paid her tributes to the legend via Zoom.

Nathi Mthethwa said the country mourns a loss of a legend, an icon and an incredible talent.

He labelled Jonas as a humble son of the soil, a father and a brother.

“He closed his eyes for the last time on the 23rd of January to join those who left before him, just 17 days after the loss of his beloved wife whom he met almost 70 years ago and shared an incredible love story with.”

He said Jonas always knew what he was fighting for.

“He embraced life and hope in his music.”

Jonas died on Saturday 23 January. It was the day Hugh Masekela and Oliver Mtukudzi died in 2018 and 2019, respectively.