Mother of a girl who bullied Lufuno Mavhunga to death speaks live on TV, takes matter to next step

Mother of a girl who bullied Lufuno Mavhunga to death speaks live on TV, takes matter to next step 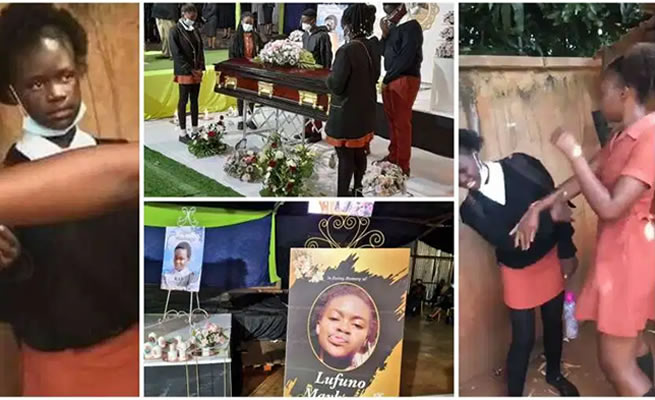 The meeting between the family of the late bullying victim Lufuno Mavhunga and the mother of the 14-year-old accused of assaulting her is almost organised, prominent Venda Chief Livhuni Matsila has said.

This comes after the mother of the 14-year-old issued a public apology on live television last week.

“But the meeting is almost a done deal because of the mother’s public apology last week. The meeting will be held in due course. It’s just a question of when.”

The meeting is expected to be led by Matsila and pastors from the area.

During his first attempt at getting the families together, Matsila told the Pretoria News: “It’s important for the two families to reconcile in the best interest of society, so we can promote peace and have an attitude that says whatever happens people still need to hear one another and express their views in order for both families to heal.”

Last month, 15-year-old Mavhunga was buried in an emotionally charged funeral days after she took her own life following a video of her being repeatedly slapped by the fellow pupil, who is now out on R1 500 bail.

She was arrested and charged with assault with intent to cause grievous bodily harm.

The teenager was released into the care of her mother two weeks ago after several weeks of spending time in a state place of safety.

Both girls attended school at Mbilwi Secondary School in Sibasa, Limpopo. The case was remanded to May 27.

Family spokesperson Kenneth Mavhunga said they had not expected the accused to have received bail for her own safety. However, they were open to meet with the other family.

“She was supposed to have been kept inside for her own safety because even those who are not related to us were angry. If anything happens to her out there our family would be the first suspects. We have not resisted meeting with them, but we want it to be away from you guys (the media).”

He said Lufuno’s mother was still coming to terms with what happened, but taking it one day at a time.

“We are willing to meet them as long as they respect that the family is still in a grieving process, especially my mother.”

The mother of the accused, who cannot be named to protect the identity of her daughter because she is a minor, issued a public apology on live television last week.

She said: “I would do anything to bring her back because I cannot put the words together of how sorry I am that this happened. But my daughter is remorseful. She said to me the other day ’I should not have beat her’.

“I have made it clear to her that what she did broke my heart. I told her that she is in trouble and the whole family is in trouble because of her actions. But my daughter’s actions should not make her an animal; we hope her punishment would be equivalent to her crime.”