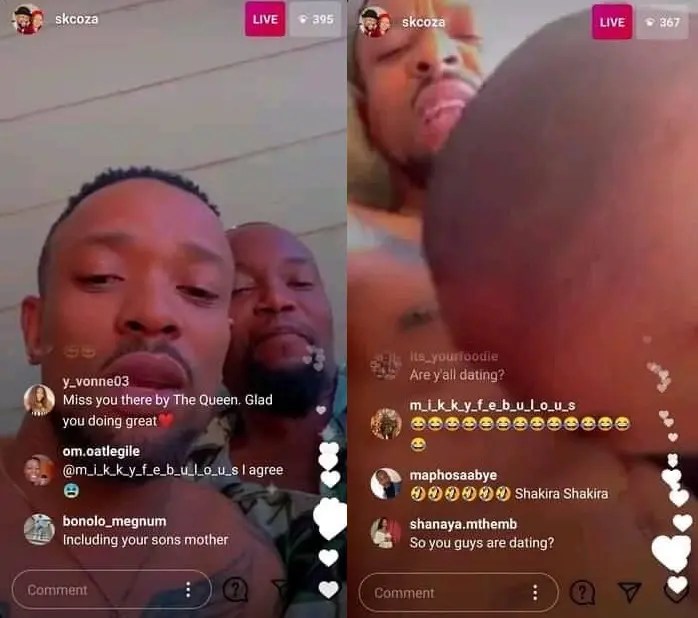 Just recently, The Queen actors Moshe Ndiki and Sthembiso ‘SK’ Khoza went on an Instagram live that has left tweeps both in shock and in confusion.

This comes after Mzansi was hardly hit with the saddening news of the late Riky Rick’s death and tweeps are questioning how these two could be so cozy with each other when the country is in mourning.

In the Instagram live, both SK and Moshe were seen half naked with Moshe busy working his mouth on SK’s torso.

Now while it is not exactly clear why they decided to parade this for all the world to see, it is clear that this is something that will be on Black Twitter’s minds for a while.

As you can already imagine, the first reaction to the live session was, are SK and Moshe an item?

What has gotten fans even more confused is the fact that, in the video, one might think that SK is actually gay, when he has always been reported to be with women.

As if that is not enough, subsequent videos on his IG stories also see the two of them looking all lovey dovey which has gotten fans all the more confused.

The comedian shared a video on his grid post, of the two of them hanging out together, but with SK Khoza busy giving him a foot massage.

The two of course look like they are having a good time and SK is even heard singing for Moshe!

As you can recall, Moshe and SK have actually been friends for a while now, but if what they are sharing on social media is anything to go by, they might be taking this friendship to the next level.

Moshe’s marriage has not exactly been all rainbows and unicorns, as he and his husband Phelo Bala have reportedly called it quits.

And while the two have a history of breaking up and making up despite the allegations of abuse that have been fronted by Phelo, this time it looks like the two are over for good.

Soon we will hear rip, these are signs of depression.

If i comment about this they'll say I killed SK Khoza…. 🤣🤣 pic.twitter.com/VGj8cosnmH

The country is mourning abo Sk Khoza ba busy i must show this to brutus pic.twitter.com/M9qCoQi0cJ

Tweeps are not sure whether this is a cry for help from either Moshe and SK, but according to some of their loyal fans, if being together is what makes them happy, then they will not interfere. Question is, are they really the newest couple in town?