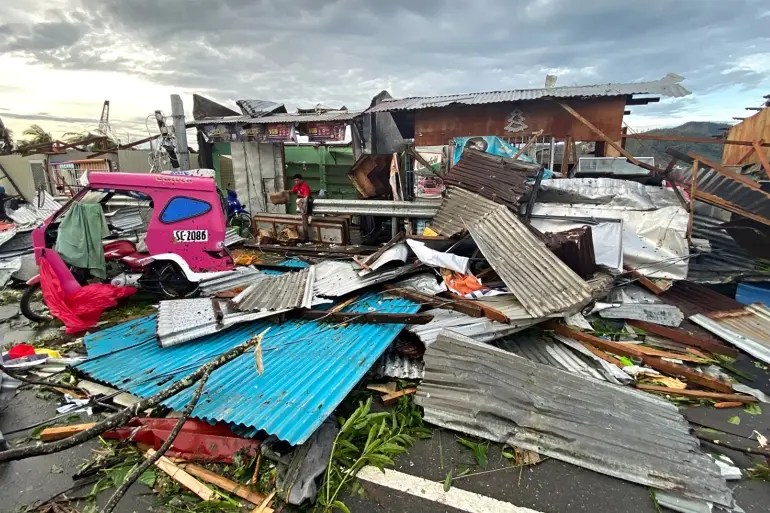 More than 90 people have been killed in the strongest typhoon to hit the Philippines this year, official tallies showed on Sunday, as efforts to deliver water and food to devastated islands ramped up. More than 300,000 people fled their homes and beachfront resorts as Typhoon Rai ravaged the southern and central regions of the archipelago.

The storm knocked out communications and electricity in many areas, ripped off roofs, damaged hospitals, toppled concrete power poles and flooded villages.

That took the overall number of reported deaths to 99, according to the latest official figures. But the toll was likely to rise as disaster agencies assessed the full extent of the death and destruction from the storm across the vast archipelago.

Rai smashed into the country Thursday as a super typhoon packing wind speeds of 195 kilometres (120 miles) per hour.

Thousands of military, police, coast guard and fire personnel are being deployed to assist in search and rescue efforts in the worst-affected areas.

Coast guard and naval vessels carrying food, water and medical supplies are being dispatched, while heavy machinery — like backhoes and front-end loaders — are being sent to help clear roads blocked by fallen power poles and trees.

“It’s going to be a long, tough road for people to rebuild and get their lives back on track,” said Alberto Bocanegra, head of the International Federation of Red Cross and Red Crescent Societies in the Philippines.
The organisation appealed for 20 million Swiss francs ($21.6 million) to fund urgent relief and recovery efforts.

An aerial survey of damage to parts of Bohol — known for its beaches, rolling “Chocolate Hills”, and tiny tarsier primates — showed “our people have suffered greatly”, Yap said.

There has also been widespread destruction on Siargao, Dinagat and Mindanao islands, which bore the brunt of Rai when it slammed into the Philippines.