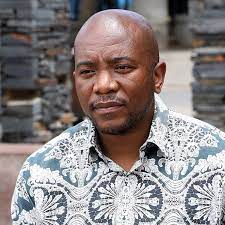 In an interview on MacG’s Podcast & Chill, the granddaughter of Desmond Tutu said in 2017 she “made a call” to politician Baleka Mbete seeking funds after being accepted to study at the New York Film Academy.

Natasha alleged Mbete reached out to the department of arts to arrange money that went towards her studies after her funding application went unanswered.

While others complete application forms, Nathi Mthethwa department gave her money because she is a granddaughter of Desmond Tutu. 🚮 https://t.co/InXl7gygVb

In a lengthy post on social media, Mmusi said a “conversation with the nation” was needed about Natasha’s academic funding.

“Funding for education must come through the proper channels and must be allocated according to need. Our government is not doing enough for students and this must change,” he said.

“Education is one of the main ways to get families out of economic adversity and on a path to wealth building. We need to make sure our limited funds are used in the best way possible to maximise the nation’s return on investment and to address national skills needs.”

Mmusi said the matter should be used to highlight the pressing challenges affecting many students in the higher education system, and both Natasha and the sport, arts and culture minister owe the public an explanation.

“I hope you can have a conversation with the nation about this academic funding. How much it was, how it was processed and your reflections on your personal use of networks to access state support. I think you do owe the public that much, Natasha,” he said.

“Mr condolences Nathi Mthethwa, we also need clarity from your office about the disbursement of these funds.”

Attempts to get comments from the department were unsuccessful at the time of writing this article. Any update will be included once received.

In her defense, Natasha took to Twitter to share a screenshot of emails she sent to the department that allegedly went unanswered before Baleka intervened.

“I applied for funding. No-one responded until the school assisted me to get in contact with the department. I even emailed Barack Obama’s Foundation hoping I’d get assistance,” she wrote.