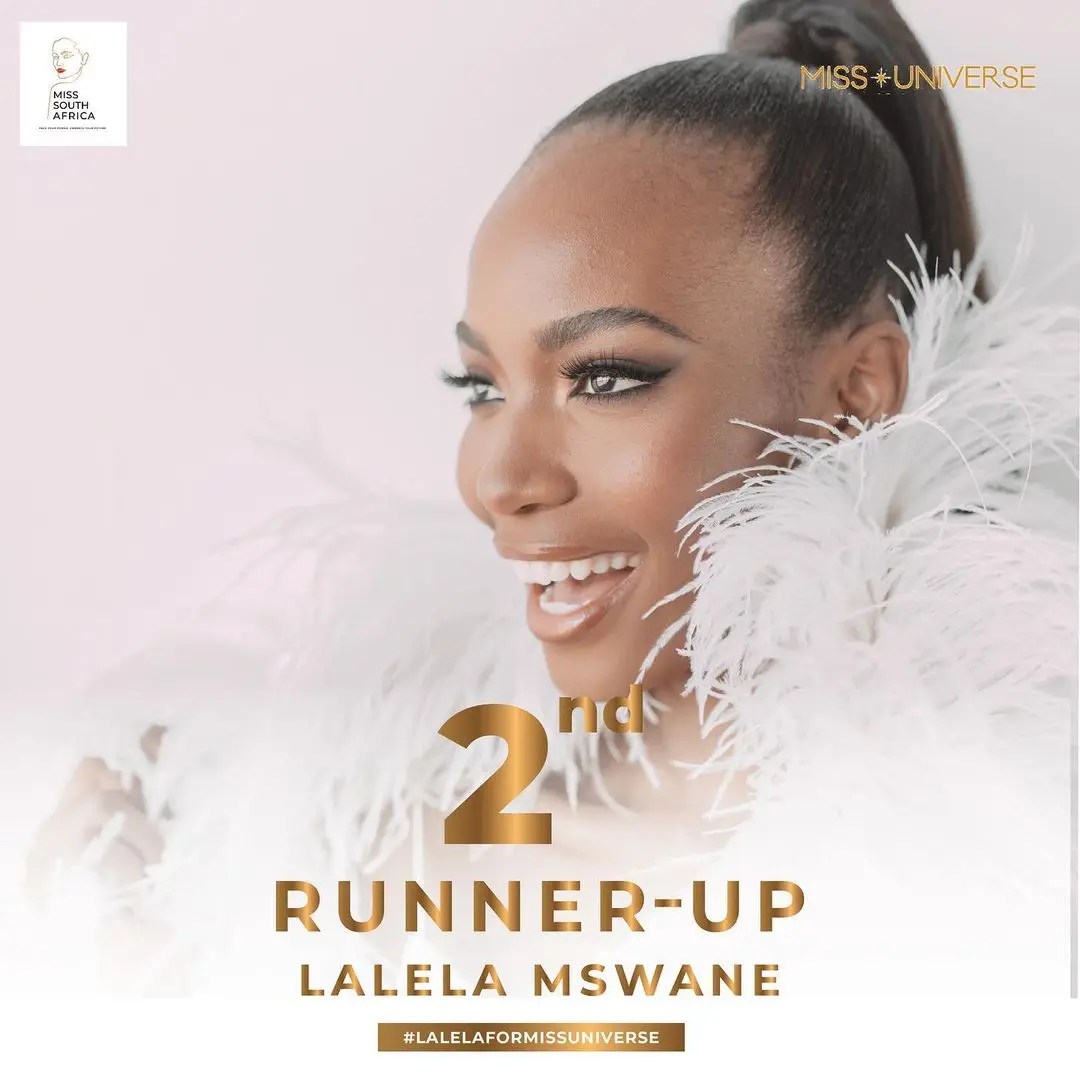 Sandhu walked away with the crown for India, with Ferreira and Mswane as runners-up,

In her final statement before the winner was announced, Mswane urged young women to “choose courage over comfort at every opportunity they get”.

“I would like young women to know that since the beginning of time they have had everything within them to achieve anything they wanted, it is the world that convinced that we do not”

24-year-old Mswane shone brightly at several points in the pageant, including at the separate national costume competition on Friday where she wore a white outfit symbolising “a Dove of Peace”.

Our beautiful Miss South Africa @lalelamswane represents her nation, culture and its spirit of Ubuntu. A nation that has shown that lasting peace can be achieved. She is honoured to bring this message of hope to the global stage.

She impressed again in the evening wear section at the main ceremony, walking the stage in this breathtaking number.

Mswane inspired many in the question and answers sections, when she spoke of cancel culture and advocated for “redemption culture”.

“I believe that everyone should be held accountable for their actions and if a person does not know how to act on social media, they should be cancelled. I believe in cancel culture. In the same breath, I believe in redemption culture and hoping the person has matured, learnt and done better. I hope they do better and redeemed. I do believe they can grow and should be given the gap to do that.”

Mswane’s participation in the pageant had been marred in controversy, with politicians and civil society calling on her to take a stance against Israel in that country’s conflict with Palestine.

The SA government pulling their endorsement of her, claiming the Miss SA Organisation did not seem eager to appreciate the negative impact of representing the country in Israel.

The Miss SA organisers defended Mswane’s participation, saying it was “not getting involved in a political war of words” but was instead looking forward to watching the recently crowned beauty queen proudly represent the country on an international stage.

In an interview with The Jerusalem Post over the weekend, Mswane said her “soul would not have been at peace” if she had skipped the pageant.

A devout catholic, Mswane said she felt “calmness and a sense of renewal” after visiting the Church of the Holy Sepulchre at the Old City of Jerusalem.

She said that she stayed optimistic in the midst of the backlash.

“Certain people have put me through hell and back. It has not been the easiest thing to deal with. But I choose to be optimistic. The way everything unfolded reminded me of His greatness and why I’m here.”