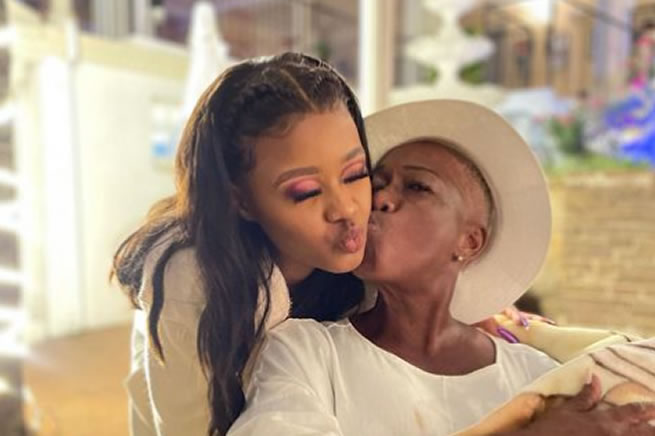 According to ZiMoja, Gumede’s health has deteriorated since the death of her son and she is now unable to speak or walk.

Mampintsha’s sister Pinky Gumede told the publication her mother had liver complications since 2016 and the death of her son had taken its toll.

“She is not taking Mandla’s death well. She started feeling ill before him but got worse when he was first admitted to the hospital,” she said.

“The doctor says her liver has been affected and she also has been diagnosed with a stroke. But her stroke is not bad, she will not be disabled if she takes her medication.

She has not been able to eat properly and that is affecting how she takes her medication.”

Pinky says Mampintsha’s death hit her hard. “Even now she is still asking for Mandla and I’ve had to tell her that he is at the airport. She didn’t have diabetes or high blood pressure, nothing.She was fit and even worked out. But this is hard. She needs a private hospital and a psychologist to help her deal with the trauma, so she can move on. At the moment we do not have money to give her special health care and we are. appealing for help,” Pinky adds.

Since Mampintsha’s death, Pinky says they have been afraid to ask Babes Wodumo’s family for help. “They called us to go to the mortuary when he died, but they did not allow us to see his body. Instead, there were police officers with big guns, and that affected uMa. Not being able to see her son’s body has led her not to accept, which is why we are here now,” Pinky says.“I am even scared to ask them for help. It is costing me more than R140 to travel to the hospital every day to see uMa and I am running out of funds. I heard that the Simelane family knows that she is in hospital, but I am afraid of being the one that calls them and be as though I am harassing them. I don’t know what we have done to them. We are not greedy people; I just want her to be okay so she can deal with her son’s death. Even the new teeth that Mandla put on her are starting to rot and the doctor needs to remove them, but he can’t because we don’t have money. I just wanted her to see his body, so she can move on. She keeps asking for Mandla,” Pinky adding that should anyone want to donate they should do so to:SC Bhengu Capitec Acc: 1304420092

Pinky went on to say Zamanguni needed to be admitted to a private hospital and was in need of a psychologist to help her deal with trauma. She appealed to the public for help.

Pinky said she and her family were “too scared” to approach Babes’s family for assistance.

Meanwhile, Babes has been shooting up trends lists since the death of her husband with videos of her performing at nightclubs and her live posts on social media going viral.

Attempts to get comment from Pinky Gumede were unsuccessful at the time of publishing this article. An update will be included once received.