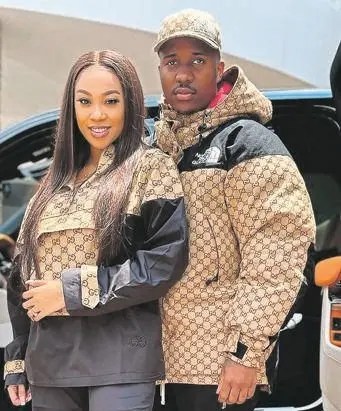 Rumours have been circulating that she forced her son to get married. But reality TV star, Shauwn Mkhize, better known as MaMKhize, has a message for her haters.

“MY LIFE IS NOT CONTROLLED BY THE NOISE!”

She told the publication she’s happy her son, Andile Mpisane decided to settle down and also happy about her new makoti, Tamia.

This after Andile (20) and Tamia (25) got engaged on Friday, 17 December in a ceremony that shocked Mzansi. This is because people thought Andile was in a relationship with DJ and influencer, Sithelo Shozi (27).

The couple has two kids together.

“It’s every mother’s dream to have a daughter-in-law to take over and carry on the legacy. I’m happy for my son because every stable man needs a woman as their support system. For Tamia in particular, I look forward to seeing her grow.

I’m excited about their future together,” she said.

MaMkhize faced a lot of backlash after Andile proposed to Tamia, and she was accused of forcing him to marry Tamia. But she said she didn’t care about the backlash because people will always talk.

“People will always talk, no matter what you do and I’ve always said I don’t live my life for other people.

“Remember, I live by my rules in my own world. The so-called backlash was misdirected because there were a lot of rumours and false narratives being spread,” she said.

Asked if she was on good terms with Sithelo, she said she addressed everything about that topic on Instagram.

“I don’t want to say anything further. The statement was issued on my Instagram,” she said.

In a lengthy post, she said she would never hurt another woman because she’s a feminist. She also addressed rumours that Sithelo was kicked out of her apartment and her kids were taken away from her.

“I personally have no grudges or any untoward feelings against the mother of my grandkids. She’s given me two beautiful grandchildren, which binds us forever and I’ll always consider her to be like a daughter to me,” she wrote.

“Nobody has been kicked out of any apartment nor have any kids been taken away from anybody. I remain committed to ensuring my grandkids grow up experiencing love from all sides and that they’re well taken care of.”

She said she has accepted Sithelo because no one was perfect.

“I accepted the mother of my grandchildren with all her flaws. I fully understand that nobody is perfect.

“Out of respect for all parties involved, I will not be going into details of their private affairs. They have both moved on with their lives and will continue co-parenting for the sake of the children,” she said.

When Sithelo was called for comment about Andile’s engagement, her phone was answered by someone who identified herself as her cousin.