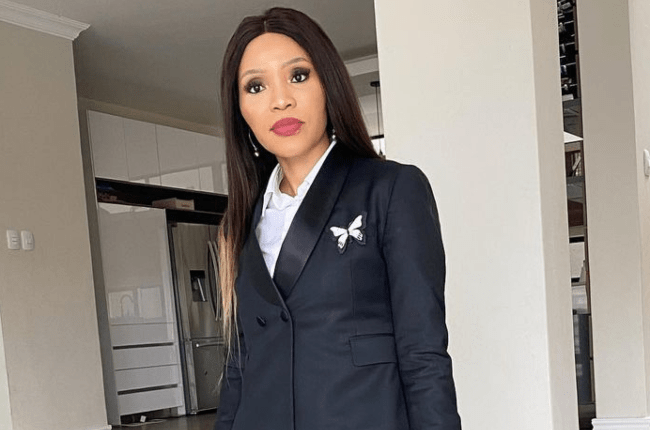 Entrepreneur and businesswoman Norma Mngoma confessed to Lasizwe Dambuza on tonight’s (3 September) episode of his YouTube show, Drink or Tell the Truth, that she wishes she had an affair when she was married to her estranged husband and former finance minister Malusi Gigaga.

Norma Mngoma shut down rumours that she had an affair while she was with Gigaba who cheated on her. She however added that she wishes she actually did.

“Rumour has it that you once had an affair while you were married with an SABC guy, is it true?” asked Lasizwe.

Norma Mngoma and Malusi Gigaba tied the knot back in 2014 and since then they’ve had several scandals surrounding their marriage.

In 2015, Norma Mngoma got into a “public spat” with her husband’s then mistress Buhle Mkhize.

In 2018, a s.e.x tape involving Malusi Gigaba was leaked. The former finance minister said that the video was solely for his and his wife’s pleasure. However, in an interview with eNCA, the businesswoman revealed that she did not like when her estranged husband always used her name to cover things up.

“What I did not like is that each and every time when he did something, when he writes a statement, he will say ‘my wife and I’ without coming to me. Every time I used to tell him that this is such disrespect,” said Mngoma in the interview.

She also distanced herself from the video citing this as just another time he was caught cheating.

“That was not my video. Like, I don’t want to lie. I have never imagined something like that in my mouth, so it was not for me. So I do not know who it was meant for. I don’t even know if he knows who he sent it to because there are a lot of those. They are his videos, not mine,” she continued.

In 2020, Norma Mngoma was arrested by the Hawks on charges of assault and malicious damage to property after she allegedly damaged a Mercedes-Benz G-Wagon belonging to Malusi Gigaba’s friend, Peterson Siyaya. Her alleged altercation reportedly took place in a “jealous rage”.

Earlier this year, Norma Mngoma testified at the Zondo Commission about Malusi Gigaba’s alleged state capture dealings with the Guptas.

Mngoma attributed the reason she kept Malusi Gigaba’s affairs to herself was because he is the father of her children and therefore she did not want to expose him. The estranged couple have two sons together.

“I know some, because there were many. I know some, some I don’t know them but they all know me,” said Norma Mngoma of her husband’s mistresses.

Mngoma, who recently launched her Suitably Norma fashion range, revealed that she has moved on and is heading into a new relationship with a special someone.

“We are warming up to each other and we are going to date,” said Mngoma.

However, the businesswoman did not reveal the identity of her mystery man, saying the country would go on a “stand-still” if she did.

“If I mention his name the country will go on a stand-still so I don’t want to.”