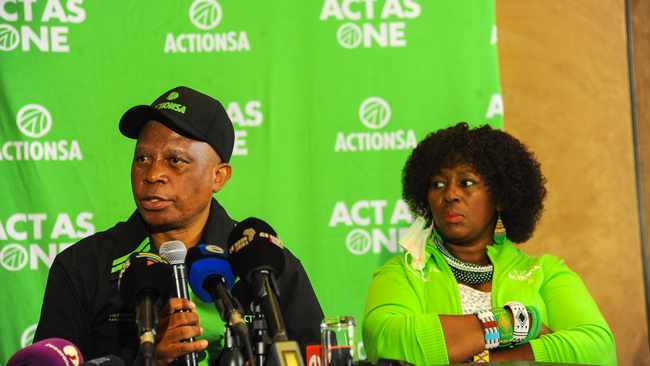 ActionSA’s KwaZulu-Natal leader Makhosi Khoza is set to step back from her leadership role to focus on her new job as the chairperson of the Municipal Public Accounts Committee (MPAC) in the eThekwini Metropolitan Municipality.

ActionSA president Herman Mashaba made the announcement on Thursday in a statement.

Mashaba said Khoza’s election to the position of chair of the MPAC was a critical role in the fight against corruption and malfeasance in eThekwini.

“The engagements held came to the view that the MPAC was not anticipated or planned for but is an extremely important role both for the residents of eThekwini and ActionSA.

“It represents the opportunity to see the first real fight against wrongdoing in eThekwini,” he said.

Khoza is a former ANC MP who joined ActionSA last year and ran as the party’s mayoral candidate for eThekwini in last month’s local government elections.

She was subsequently elected in council as chair of the MPAC following the polls.

Mashaba said the decision for Khoza to step back from her current role was due to the fact that her new position would affect her responsibilities as ActionSA’s KZN chair.

He said the role of the party’s provincial chair required Khoza to be more involved in establishing ActionSA’s local structures throughout KZN ahead of the 2024 general elections.

“Dr Khoza is a leader whom I respect for her considerable contributions to South Africa both before and after she joined ActionSA.

“We are deeply grateful for her continued commitment to ActionSA’s work in establishing a real alternative to the ANC for the South African people.

“We wish Dr Khoza nothing but the best in her work in eThekwini but are comforted by the notion that she remains an active and loyal leader within our ranks,” Mashaba said.

An announcement on ActionSA’s next KZN chair would be made in due course, he said.