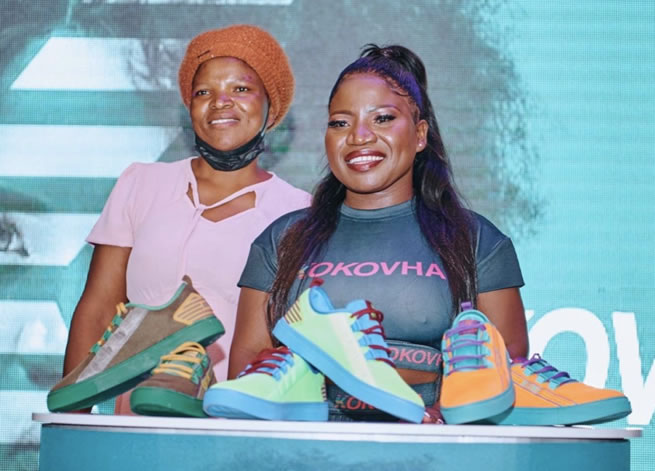 Award winning muso Makhadzi and her record label Open Mic Productions have turned the table against sneaker maker Kicks Sportswear in an R8 million bridge of contract lawsuit which he has instituted against the singer.f

This after a Sunday newspaper reported that the musician and her record label have been dragged to the Pretoria High Court in an R8.2-million lawsuit for failure to promote the sneaker brand Kicks Kokovha which is produced by the sneaker line.

In a statement released on Wednesday, Open Mic Productions argued that Makhadzi given name Ndivhudzannyi Ralivhona, wishes to place on record that the owner of Kicks Sportswear failed to keep his end of the bargain and was in breach of his contractual obligations.

Open Mic said Kicks Sportswear owner, Sammy Mhaule, in his summons made claims which contained falsehoods, fabrications and misrepresentation of how the events unfolded.
We entered into an agreement with the complainant in October 2021 worth R120 million, this value projection made sense financially and legally.

“The supplier insisted that we launch the Kokhovha Kicks footwear even when we had concerns that the peak festive shopping season was looming, and we had no stock in hand,” the statement read.

Kicks Sportswear which is owned by the businessperson launched the limited-edition Kicks Khokhova in partnership with the star in December at Mall of Africa.

The record label added that: “Stock never arrived in the agreed 90 days. It wasn’t until February 2022 that 6900 shoes were received. Several attempts were made by Open Mic Productions to assist the supplier to honour the obligation to deliver the goods,”

Open Mic allege that Kicks sportswear was supposed to provide 8000 pairs of shoes on a monthly basis and that did not happen to this date.

The statement read:
We questioned him about his capacity. He insisted that he would manage. Open Mic Productions went as far as providing him with Makhadzi’s weekly schedule so that he can arrange activations around the country to increase the sale of shoes, but he failed or simply refused to arrange the activations.

The record label claims that it had one activation in Makhado which it had organised where several units were sold. They claimed that Mhaule stopped taking our calls and refused to participate in planning meetings or any engagements relating to the project.

“A few weeks later we received a lawyers’ letter in April. In an attempt to rescue the project, we asked for a meeting with the complainant without the lawyers. At this meeting it was agreed that we will attempt to jointly salvage the situation.

“Instead of a meaningful engagement with the complainant we received summons plus particulars of claim. Even at this stage we reached out to the complainant and his lawyers to see if we could save the project considering that the agreement was to lapse in a few months, the discussions did not yield any meaningful results,” the statement read.

“We are puzzled by his claim of R8million considering that Makhadzi has lost earnings due to the fact that she had exclusivity tied to the deal and as such missed other opportunities. On several occasions during the month of December 2021 Makhadzi called Kicks asking for merchandise to wear on stage and nothing was delivered. She was given almost every excuse under the sun on why the shoes were not available,”

In his letter of demand, Mhaule reportedly requested: