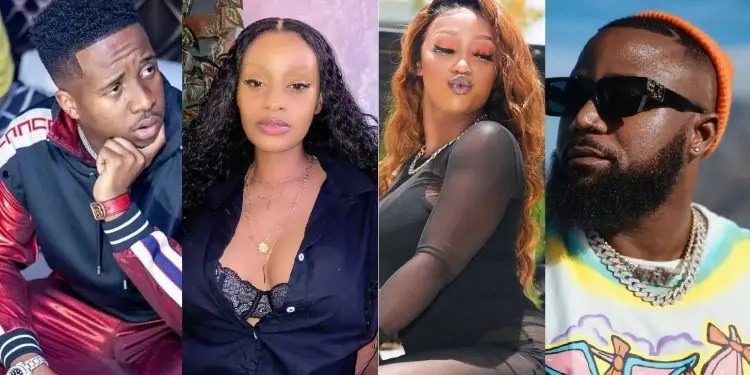 A love triangle of the stars? Very rare in the South African entertainment industry. MacG has alleged that Cassper Nyovest, Andile Mpisane, Thobeka Majozi and Kamo Mphela are in a love triangle. How? After Cassper purchased his McLaren in December 2021, he also threw himself a star-studded birthday bash with the likes of Black Coffee on the decks. People noticed the absence of Cassper’s baby mama Thobeka Majozi and then the rumours of their break up started circulating.

Andile Mpisane and the amapiano star Kamo Mphela were in a relationship when Sithelo and Andile were still an item. Sithelo commented on the issue and said she wouldn’t cheat with Andile. After a few months on Kamo’s and Andile’s fling, Andile got close with Sithelo again until he wedded Tamia Louw.

Despite Andile being a newlywed man, MacG says the Royal AM Chairperson sleeps with Thobeka Majozi. Podcast and Chill’s host MacG also said that Kamo Mphela and Cassper are in a serious relationship together.

A close friend of Thobeka told tabloids Ms Majozi moved out of Cassper’s house and went to KZN. After Cassper’s victory in the Fame Vs Clout match, his baby mama gushed at him winning.

There was a bit of McLaren beef between the two gentlemen, but they surprised fans by hanging together at the lifestyle club Konka in Soweto. Andile also purchased all of Cassper’s new alcohol brand bottles.

Was their Konka meeting fake love for pictures? When the two gentlemen were together in Konka, it’s possible that they were showing fake love to each other. After their meeting, it is indeed possible that the two young men wanted to spite one another. People compared Andile buying himself all of Cassper’s bottles to when 50cent purchased all JaRule’s front row tickets to his concert. Perhaps what MacG said is fake. Perhaps Andile and Cassper are in a severe sugar-coated beef.