Thando Thabooty has rekindled her relationship with her tall, dark and handsome boo and revealed this on Valentine’s Day. Her bae Jaji Abolore, owns a famous Sandton night club, first let loose their little secret of being a couple on his Instagram. They seemed to have broken up for a while until they posted each other again on IG during their romantic dinner.

When a local publication got a bit excited for Thando going back to her lover, they dragged Lunga Shabalala in the mix however he wants nothing to do with it. Lunga is known to be Thando’s ex boyfriend and even if they never confirmed it nor denied their relationship, their social media interaction spoke volumes.

When Thando flaunted her new man, it became evident that she and Lunga were no longer a couple. The publication claims that Lunga got very excited when Thando and her bae Jaji broke things off and that he is appalled that they got back together. He apparently wanted to get back with her, after he got dumped for the businessman.

Pouring cold water to these claims, Lunga slammed the tweet and asked for his name to be taken off from the article. Slamming the fake news, Lunga commented “This is the nonsense that I won’t tolerate, There’s no need for my name to be mentioned in this article full of inaccuracies. For everyone’s sake remove any mention of my name,” he said as quoted by OkMzansi.

For Valentine’s Day, Thando shared snaps of each other looking all lovey-dovey. 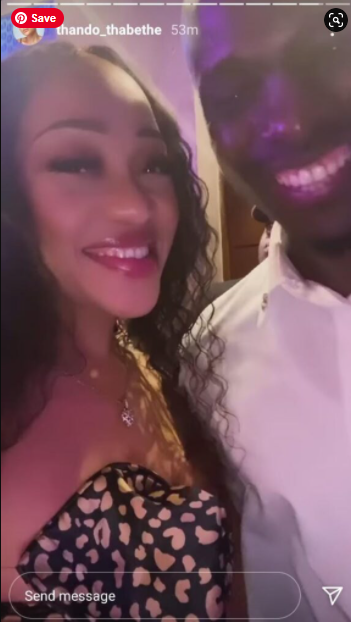 After bumping into each other at events, Lunga and Thando made everyone around them curious about their relationship status, begging to know if they were just friends or lovers.

First, they claimed to have bumped into each other at Somhale’s traditional wedding. Thando posted a picture of the two of them and captioned; “So great bumping into you.”

Of course fans did not buy that excuse, as it was clear as day that they arrived at the wedding together. This was made even more obvious by the fact that they were wearing matching outfits!

Then at Somhale’s white wedding, the two coincidentally ‘bumped’ into each other again. Snaps posted by Lunga showed how stunning they both looked in black and white. The picture-perfect snap was coupled with a caption that read; “Funny how we always meet like this. Always a pleasure bumping into you.”

Even Musa Mthombeni could not hold back his opinion, “SBWL to bump into someone’s daughter as often as @LungaShabalala bumps into @Thando_Thabethe. They always meet at weddings.”