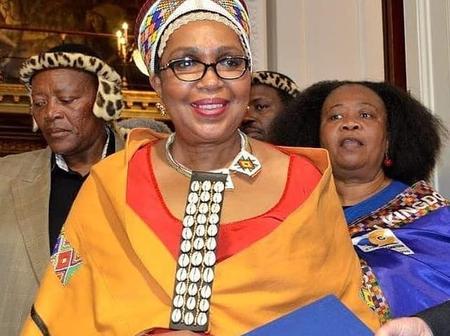 DESPITE the raging and deep internal divisions within the Zulu royal household, the sister of the late King Goodwill Zwelithini has frowned at the decision of the KwaZulu-Natal government to freeze funds for all royal cultural events.

Princess Thembi Zulu-Ndlovu who is backing Prince Simakade to take the throne that is currently occupied by King Misuzulu, albeit on de facto basis as he has not been officially coronated, said the decision took them by surprise as they were not consulted.
On Sunday the provincial government led by Sihle Zikalala publicly announced that it would freeze the funding until the fight for the throne had been settled. The statement was in response to another one from the IFP which claimed that the decision to freeze the funding was aimed at weakening the institution of the monarch.

Furthermore, the IFP lashed out at the provincial government, saying the decision was a tacit support to the so-called “royal rebels” including the princess, Princes Mbonisi and Prince Thokozani who are leading the challenge against King Misuzulu.

Among the cultural events that have already been affected by the freeze are the annual reed dance in Nongoma and Friday’s annual celebration of King Shaka’s day. All these events were hosted on a shoe-string budget following last-minute fundraising by the supporters of the King.
Frowning at the decision, the senior princess said like everybody else, they got to know about the decision via the media and that left them with a lot of questions and the motive behind it. She said their proposal to the government was that all cultural events billed for this year should be suspended to mourn the passing of the King who died in March, not to freeze the entire budget.

“The decision left some of us stunned because it was never discussed, so that we could give our input and perhaps suggest a solution. We just heard via the media that there was such a decision and we were taken aback. Our proposal was that all cultural events of the Zulu nation which are funded by the government be halted and have the nation mourn. It was never about entirely freezing their funding as it is now the case. Remember that these events have nothing to do with the throne, they are cultural events of the Zulu nation and the issue of the throne is an internal matter,” he said.

Meanwhile, as both factions are preparing to attend the mediation talks to be led by the Minister of Cooperative Governance and Traditional Affairs (Cogta), Dr Nkosazana Dlamini, who was assigned by President Cyril Ramaphosa to broker a deal, the King Misuzulu side has already gathered information about the nomination of Prince Simakade for the throne.
An insider within the faction said the nomination was fraudulent and should not stand as his supporters within the royal house hijacked two royal funerals in Mtubatuba and Nongoma to harvest signatures that were later presented as those of people who attended an official royal family meeting.

“On our side, there is no dispute about the throne, Misuzulu is our king and he correctly nominated and ascended to the throne. The nomination of Prince Simakade was fraudulent as members of the royal family who attended funerals toward the end of May were made to sign a fraudulent attendance register which was later attached to the letter sent to the Presidency supporting his nomination.

“One of the princes who was at the funeral asked about that register before signing it and he was told it was for Covid-19 purposes and it later turned out that was not true,” said the insider close to the King.

When asked about that, Prince Mbonisi who speaks on internal royal matters and who was behind the submission of Prince Simakade’s name to the KwaZulu-Natal Office of the Premier and the Presidency, said he had no hand in that as he never attended the said funerals.