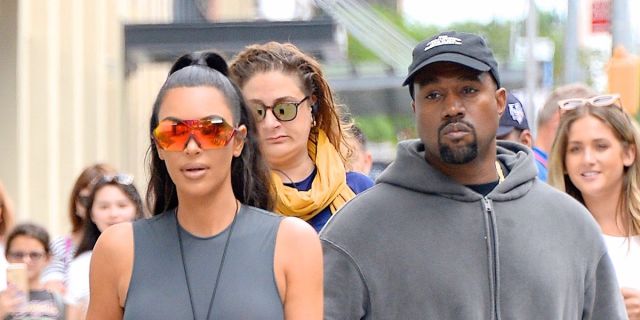 Kim Kardashian West is said to be planning a Valentine’s Day “celebration” with her kids and family – without Kanye West.

The “Keeping Up with the Kardashians” star is said to have very little contact with her 43-year-old rapper husband and is to spend the day of romance with their kids, North, seven, Saint, five, Chicago, three, Psalm, 21 months, and family.

An insider told People: “Kim is great. She has a Valentine’s Day celebration planned with her kids and family. She likes to make it special for the kids. She doesn’t have any contact with Kanye.

“It’s obvious that she is just focused on the future.”
It was recently claimed that Kanye is “less than thrilled” that his divorce from the 40-year-old reality star will be broadcast on TV.

The trainee lawyer will reportedly discuss the end of her marriage on the last series of the family’s E! reality show and the “Bound 2” star is not impressed.

A source said last month: “He is less than thrilled. She will continue to focus on her business empire. Kim has been in individual counselling and is at peace with where her life is headed.”

Kim and Kanye had been in marriage counselling as they “tried to work through things”.

A source said of their counselling sessions: “Divorce has been discussed, but Kim wants more than anything for their relationship to work. There wasn’t anything specific that happened that led them to this point … They are 100 percent aligned when it comes to the kids.”

However, another insider insisted the couple are just dealing with “regular relationship issues”.

They added of their struggles: “It’s just regular relationship issues. There is no one else involved. Divorce talks have been on and off with them since the spring.”

A source previously claimed Kim has accepted she and Kanye are just “not on the same page” anymore and she is focusing her energy on her future.

The insider claimed: “They are just not on the same page when it comes to their future as a family. And Kim is okay with it.”

“Kim knows what she wants to do with her life. She wants to keep living in LA, create the best life for the kids and focus on her work passions.”