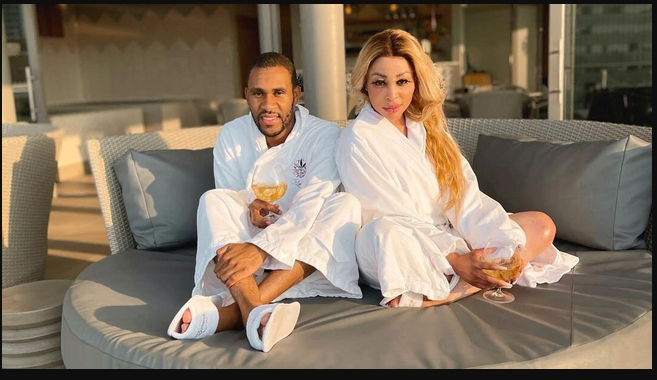 Her new man is Zimbabwean businessman Kudzai Terrence Mushonga and according to Sunday World the two love birds have been dating casually for two months.

The pair allegedly made things official last month and are now exclusive.

Mbau has been posting pictures of him since last week but with his face obscured or blurred out.

However, this week the new couple officially appeared together on her Instagram feed and in her stories wearing matching white robes while enjoying a beverage.

According to The South African, Mushonga was allegedly involved in a fraud scandal and has been evading the Zimbabwean police for four years after allegedly duping a businessman out of R2.5 million.

Last year, Mbau announced that she had split from her long-term partner, Tebogo Lerole, for the second time.

The pair first broke up in 2018 but decided to give love another try when they rekindled their romance in the hopes of working through their problems.

Taking to her Instagram account, Khanyi made the announcement to her 2.2 million followers by posting a black-and-white picture of herself and Tebogo. In the picture, the pair are looking out at the ocean.

“Guys we have been here before, certainly words I have uttered before … Our second attempt grew us even further apart,” she wrote in the caption.

“A decade of dating someone comes with great joy and immense difficulty, that fighting to stay together is sometimes not enough. Some paths are meant to cross and certain season(s) to pass. Tebogo Edward billion has chosen to take a different path and I have chosen to respect it and let him soar into greatness. And by this we are no longer an item,” she added.