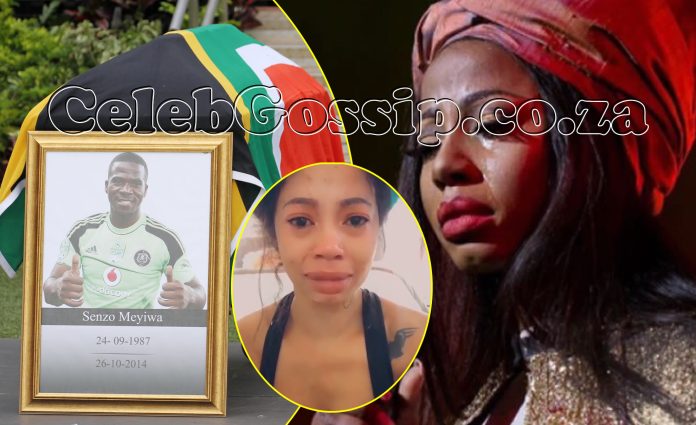 South African reality TV star, Gogo Maweni admitted to using muti on an ex-boyfriend, soccer fans claim another Orlando Pirates player – Monnapule Saleng – is on the receiving end of “witchcraft” rumours, after his dismal performance in the Soweto Derby match against Kaizer Chiefs.

And according to a number of tweeps, the person linked to the rumours is singer Kelly Khumalo, whose Buccaneer boyfriend Senzo Meyiwa was shot and killed in 2014.

Kaizer Chiefs scored a 1-0 victory over Orlando Pirates in the highly -anticipated match that took place at the sold-out FNB Stadium on Saturday 29 October.

Whilst Saleng played his heart out in the Soweto Derby match against Orlando Pirates, it just wasn’t enough to counter the strong attack of their opponents; Kaizer Chiefs.

Surprisingly, Saleng’s performance was in stark contrast to last week when which he was named “man of the match”. The title was given following Orlando Pirates’ victory against Mamelodi Sundowns in the MTN8 semi-final.

The 24-year-old joined Pirates last year after a stint at Free State Stars.

Sadly, many soccer players judged Saleng harshly for his performance on the pitch.

Others claimed his poor play was linked to celebrity Kelly Khumalo, whom many South Africans insinuate “curses” every man she sets her eyes upon.

But what does Kelly have to do with Saleng?

In a fake tweet that has gone viral, a screenshot of the singer gushing over Saleng has set tongues wagging.

In the doctored tweet, the singer supposedly says: “Up the Buccs. I love how my man crush was hitting the runs”.

And following the match on Saturday, tweeps are using the “receipt” to push their agenda of Kelly Khumalo being to blame for Saleng’s disappointing performance.

Here’s what tweeps had to say:

ChrisExcel (@ChrisExcel102): “Ever since Kelly Khumalo complemented my boy Saleng … he’s never been the same since 😭😭 Fear women. 😭”

Phila (@Phungashe_Phila): “Saleng is under threat we have to deal with this fast.”

CadafiaKing (@cadafia_king): “Lomtsakatsi sekancalile weah Kelly Khumalo just stop there please you have done it first but not this time please Kelly stay away from our players we beg you please 🙆🏽‍♂️🤦🏽‍♂️🙏🏽”

Mora (@mongs_sokoyi): “I blame Kelly Khumalo, We don’t have a good goal keeper because of her 😔 UP THE BUCKS!!!”