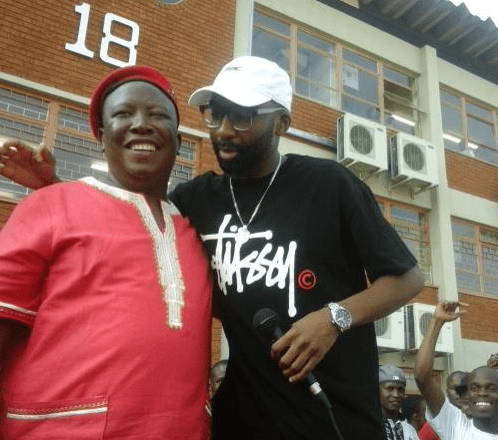 The news of his death has shocked the whole South Africans and many still find it unbelievable.

While his family members are yet to release an official statement, it’s reported that Riky committed suicide; his last tweet says it all.

“I’ll return a stronger man. This land is still my home.”

While some celebs are trying to keep the identity of the late star private, a few others have taken to social media to pay tribute and express the pain his demise has caused.

“We love you my man; we did not listen to your loud whisper. We thought we still had time, and unfortunately, we are now too late to intervene,” Julius Malema wrote.

We love you my man; we did not listen to your loud whisper. We thought we still had time, and unfortunately, we are now too late to intervene. 💔💔💔 pic.twitter.com/9Tj5otfYwv

” I’m listening to this over and over again. I’m waiting for someone to tell me it’s a prank. We spoke on the phone yesterday you said I should be strong bro,” Lady Du wrote with tears in her eyes.

It was an HONOR to have got the chance to even be on a song with you bro 🙏
Thank you for everything you've done in Sa Hip Hop Industry and Fashion
Taking us to the Next level 💯Sad it had to end like this brother
Im literally in tears while typing this
Rest easy King pic.twitter.com/iLh3npCW1D

“Running out of time, tears running down another mother's eyes
If it ain't a suicide then it's a homicide, Black-on-black crime like we color blind” A-Reece 💔🕊. pic.twitter.com/7wSZlyRDX6