Julius Malema: EFF councillors in Inanda must ensure that services are delivered

Julius Malema: EFF councillors in Inanda must ensure that services are delivered 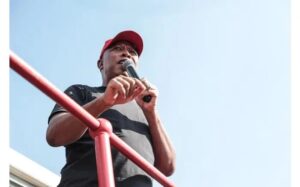 He said if need be, the councillors must disrupt meetings.

The leader of the Red Berets was speaking at the EFF Siyabonga rally in Durban.

Malema visited Inanda while campaigning for in the local government polls last year. He said the community raised concerns about poor service delivery.

The 24 EFF councillors in the eThekwini council now have a task to complete.

“I want EFF councillors who are going to disrupt the council. When they say ‘why’, you will say the Inanda people want sanitation, water and electricity including houses.”

Malema said he wants his party’s councillors to put pressure on the mayor and municipal manager to deliver service to communities free of charge.