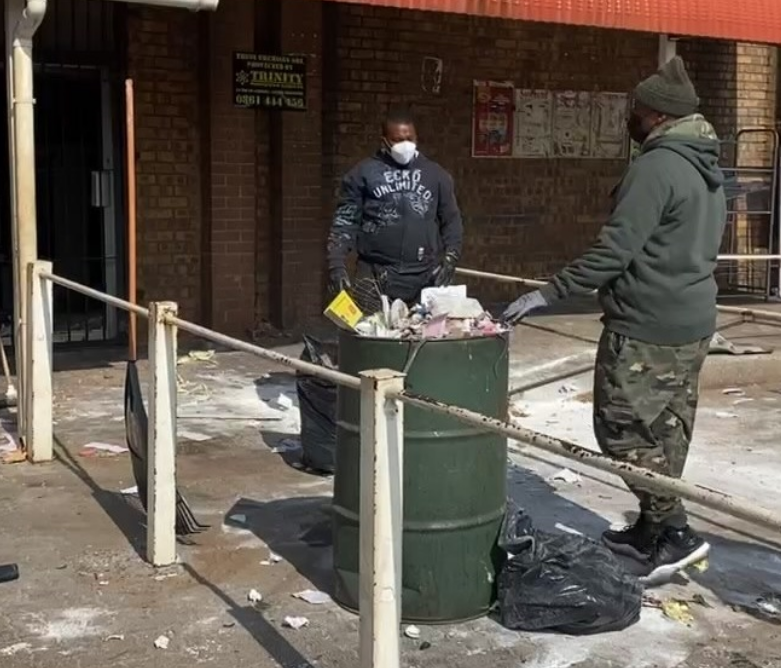 Jub Jub has decided to lead by example and get his hands dirty by cleaning protea glen mall in Soweto which was affected by the countrywide looting.

Jub Jub told South Africans on his Instagram that people should be the change they want to see because nobody is coming to save us.

Jub Jub was applauded for getting his hands dirty and truly taking care of the community.

@patrickthobela said, “God bless Grootman. We can change the world just one step of showing humanity at a time. Respect, respect and respect bro”

@mamasenya1e said, “Real man, well done your son will be proud of you, as we community r proud of you”

@sandiswacollinss said, “You doing an excellence Job Bro👏👏 your appearance means a lot to so many people. Dankie maswidi”

@leramash said, “I have Soo much respect for you🙌🏾I am definitely watching all your shows I mean uyajola 9/9 it’s a Lott because I get too invested but bona I am within”

@siwephufanekhaya said, “Thanks Jub for leading by example, not these celebrities who are perpetuating violence instead calming down south Africans. They call unnecessary press briefing just to perpetuate violence. Thanks a bra”

@kerry_manaba.za said, “Unlike many other celebrities you are a real human being . Dankoo Jub for be truly true to who you are and our people”

@silasoneofthemostillest said, “Where are the celebrities we support? Why are they not on the ground. BLACK KLEVA ONES 👽BUT WHEN THEY SHARE LINKS YSLL DOWNLOAD OKARE YOU GET A SHARE”

Jub Jub’s act of kindness did however leave others thinking that the Uyajola 9/9 presenter was coming for them to air their dirty laundry.

@dipuokeikelame said, “People are going to run away when they see you”

Jub Jub was also accused of telling people to go loot and then cleaning after them.

@thami_wise said, “Promoting people to loot and now you got your senses back…because you see your mission has failed masimba”

@jo.nnie4096 said, “You said that the looters were justified ? How, when did u change”

@namedi_phatudi said, “But, I know you were saying we shouldn’t judge or criticise the looters just izolo. Now you cleaning after them saying nobody is coming to help us? Take a position man

@terah_ndlovu said, “Lol jub jub goes with the wind… Not long ago he was justifying the vandalism and stealing from these malls… Today he shows up with cameras to help clean up hay I wash my hands”

Of course some other people believe that Jub Jub took the cameras with him for publicity. He was put on blast.

@newageprorsa said, “Leave the cameras at home, you ain’t changing nothing but tryna get reviews”