Jacob Zuma’s life is at significant risk, will take 6 months to treat him – SANDF medical boss

Jacob Zuma’s life is at significant risk, will take 6 months to treat him – SANDF medical boss 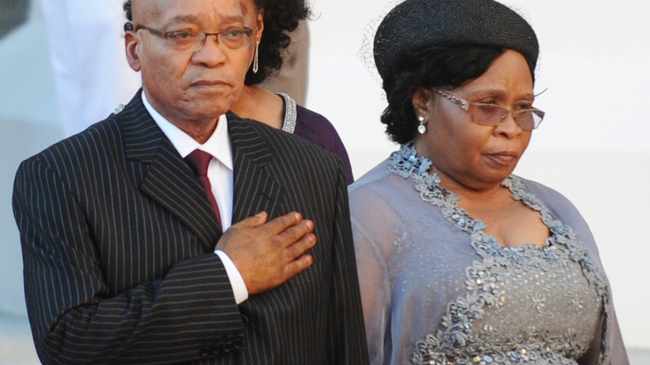 Zuma has over the years courted so much controversy including fathering 23 children and impregnating at least 15 women including daughters of his friends as well as dating girls 50 years younger than him. Zuma has had unpro_tected sex with several daughters of his close friends, impregnating some in the process. One of them is his baby’s mother, Sonona Khoza, who is the daughter of powerful soccer businessman, Dr Irvin Khoza, the Orlando Pirates chairman, who Zuma is not married to.

Meanwhile, in an as yet unsigned affidavit served on Zuma’s lawyers and the KwaZulu-Natal High Court in Pietermaritzburg on Monday, prosecutor Billy Downer has made it clear that the State isn’t satisfied with the “vague generalities” contained in Brigadier General Dr Mcebisi Zukile Mdutywa’s submissions, which could have major implications for the future of the Zuma corruption trial.

The former president was hospitalised last week while serving a 15-month jail term for defying a Constitutional Court ruling that he should appear before the State Capture Inquiry. The apex court is expected to rule on Zuma’s application for a rescission of that judgment in the coming days.

Zuma’s lawyers were this morning scheduled to begin arguing his application for a “special plea” in the arms deal-linked corruption case against him, in which he stands accused of receiving R4.2 million in benefits from his former financial advisor, Schabir Shaik, in exchange for furthering Shaik’s business interests. Zuma also faces charges of accepting a R500 000 a year bribe from French arms company Thales, as a bribe for protecting it from any potential Arms Deal investigation.

In his special plea, Zuma is now due to argue that he should be acquitted of all of these charges, because the entire National Prosecuting Authority (NPA) is too biased to prosecute him.

Following Zuma’s hospitalization last week, Mdutywa wrote to the head of the Estcourt Correctional Services centre to inform her that Zuma had been “put under active care and support after he suffered a traumatic injury” on 28 November 2020.

Mdutywa, who leads the South African Military Health Service’s Presidential Medical Unit, then formally informed prison authorities and the NPA in KwaZulu-Natal that Zuma had been admitted to hospital last week and was “undergoing extensive medical evaluation and care”.

This, he said, was “as a result of his condition that that needed an extensive emergency procedure that has been delayed for 18 months due to compounding legal matters and recent incarceration and cannot be delayed any further as it carries a significant risk to his life”.

“The medical team is actively monitoring his progress and will inform you soon as to the prognosis and outcome thereof through a medical report,” he said.

Mdutywa added: “We trust that the court processes will accommodate this urgent health program such that we can be able to work swiftly to restore his health. The minimum proposed period of care is six months during which periodic reports will be communicated to advise on the possible availability of any further engagements on your end.”

Mdutywa’s submissions strongly suggest that Zuma, who is eligible for release on parole after less than four months, will not be moved back to jail any time soon.

Downer has however said the State wasn’t happy with the lack of detail contained in Mdutywa’s submissions – specifically in relation to Zuma’s “condition”, the “extensive emergency procedure” he would need to undergo and the “minimum proposed period of care of six months”.

Despite these misgivings, Downer said the NPA would support the Zuma legal team’s planned application for a short postponement of the case against him this morning – if it was “supported by an affidavit by a medical practitioner treating the first accused (Zuma)”.

Should Zuma seek a second postponement after this one, the State also wants that application to be supported by the testimony “of a medical practitioner treating him, who may be cross-examined by the State” – a demand that the defence has agreed to.

The State will also be able to lead rebutting evidence from witnesses during this process.

If such a hearing goes ahead, it’ll be the first time that Zuma’s medical condition – which he has previously used to explain his absence from State Capture Inquiry hearings and his trial – will be interrogated in an open court process.

Whether Zuma is prepared to allow details about his health to be disclosed, however, remains to be seen.

Zuma’s foundation had previously claimed that his hospitalisation was nothing to be alarmed about “yet”, as he was “attending to his annual medical routine check-up”. A day later, it stated that it was awaiting a report from Zuma’s doctors and asked the public to “keep him in your prayers”.

Downer has now revealed that the head of the Estcourt Correctional Centre last week sent a WhatsApp message to State advocate Deneshree Naicker, informing her that Zuma the had been “emergently (sic) referred to outside hospital due to his medical condition last night”.

According to Downer, Naicker was contacted by Acting Regional Commissioner of Correctional Services in KwaZulu-Natal Kenneth Mthombeni, the following day. Mthombeni told Naicker that Zuma would not be brought to court as he was currently hospitalised in Pretoria.

As yet, it remains unclear in which hospital Zuma is being treated.