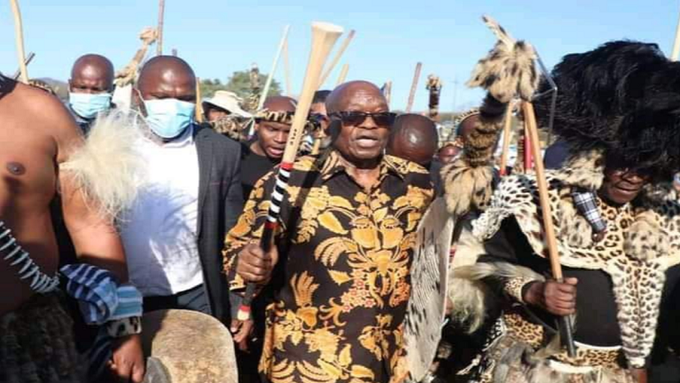 After model Naomi Campbell penned an open letter to former president Jacob Zuma, imploring him to ‘act responsibly’ and appear before the State Capture Commission, Zuma’s daughters have clapped back with a scathing open letter to her.

Campbell recently posted a series of photos showing the aftermath of days of looting and violence in Gauteng and KwaZulu-Natal, along with a lengthy caption addressed to Zuma.

This did not sit well with Duduzile Zuma-Sambudla or Jabu Zuma, who proceeded to write a strongly worded response to Campbell.

Jabu accused Campbell of not really knowing the “true South Africa”, and proceeded to lay out the decades of struggle undertaken by Zuma during the apartheid era.

“In case you aren’t aware, President Zuma is one of those South Africans that fought for the liberation of this country, literally. He spent 10 years on Robben Island, +/- 15 years in exile and many more actively fighting for the liberation of this country and its people day in and day out – so don’t you dare think you’re in a position to tell anyone and especially not him about South Africa.

“If you had actually been watching President Zuma over the last few years as you claim, you would be well aware of the fact that all he has ever called for was a fair trial. He has been more than wiling to stand in front of a court and prove his innocence.

“When you say he has gone out of his way to avoid court you are sorely mistaken – he has shown up to every court appearance except in cases whereby it was beyond his control,” Jabu said.

She continues to explain to Campbell, amid claiming she has “little (read no) knowledge” of the State Capture Commission, why Zuma found fault with the proceedings of the Commission, and allegations that Acting Chief Justice Raymond Zondo, who heads the commission, and Zuma, have a “close personal relationship”.

These claims were however refuted by Zondo last year after Zuma’s legal team asked for Zondo to recuse himself.

“Does it make sense to you that a judge rules on a matter in which they are involved and sit at the core of? Is it possible for one to be impartial in a case that involves them?

“If you’re going to call for President Zuma to go before the commission, keep the same energy for everyone else who has also been summoned by the commission but refused to appear.”

Jabu went on to tell Campbell that the recent violence under the #FreeZuma banner was a larger problem than Zuma’s arrest, something Jabu claims Campbell would have known “if you had actually done just a little bit of research.”

“Since you’re in a mood to condemn, start with the Ramaphosa administration that has looted an estimated R500 billion in Covid-19 relief funds yet expects its people to live off of R350/month in a pandemic.

“The Ramaphosa administration that has failed dismally to provide its people with adequate healthcare in a pandemic when they needed it most.

In a last jab at Campbell’s letter, Jabu said she was in “no position to tell [Zuma[, or anyone else, about what is and what isn’t good for [Madiba’s vision], a vision that is also [Zuma’s].

“President Zuma has dedicated his life o this fight and has done significantly more than you ever could for that vision so you, of all people, will not be making any recommendations about what he should do – you’re simply not qualified and must be deluded to think you could ever!”

She concluded her letter by telling Campbell to “keep your unsolicited opinions to yourself where you lack knowledge (this is one of those times).

“This is bigger than you and I, let’s leave it to the adults.”

So Proud Of My Sister Jabu Zuma For This Powerful Piece “Dear Naomi Campbell” #NaomiCampbell pic.twitter.com/cp4KV1wAhe