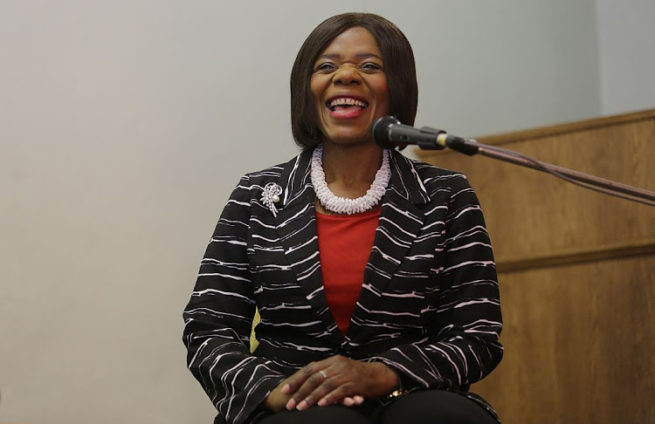 Hard power. That’s what former public protector Thuli Madonsela says it took to bring Jacob Zuma to heel in the end. And this, she says, is why the Constitutional Court took the hard-line approach it did last week – slapping the ex-president with 15 months in prison for contempt over his refusal to abide by an order to appear before the Commission of Inquiry into State Capture.

In the end, not only did Zuma miss his deadline, it wasn’t until the 11th hour that he eventually capitulated.

A minority judgment last week held while Zuma was clearly in contempt, he should have received a suspended sentence on condition he appear before the commission.

But, said Madonsela, what was needed was “hard power”.

“If you look at what it took just to get him to comply with this court order, you’ll realise once again that as sad as this tragedy is, the majority court was right,” Madonsela said yesterday.

“It took hard power to get former president Zuma to do what ordinary people do ordinarily”. Still, she said, “at a human level, it’s a tragedy”.

Zuma’s “final reckoning with the rule of law”, Madonsela said, was “a giant development in the history of South Africa’s democracy”.

Zuma’s incarceration brought to a close a dramatic week of will he, or won’t he?

But he and his legal team still have a few cards to play.

On Tuesday, they moved an urgent application in the KwaZulu-Natal High Court to try and stay Zuma’s detention pending the outcome of another application they have lodged in the Constitutional Court to try and get the ruling against him rescinded. Judgment is expected today.

But pundits aren’t expecting it to go Zuma’s way and Dr Llewelyn Curlewis, who lectures law at the University of Pretoria, yesterday believed the case should be thrown out.

But were the high court to find in his favour, it would be giving the former president a temporary “get-out-of-jail free” card.

He’s also lodged a constitutional challenge to the Criminal Procedure Act (CPA) which could drag on for years, with any ruling likely to find itself the subject of a protracted appeal process.

If he isn’t successful today, Zuma still has a limited number of options available to him.

He could, for example, try appeal the ruling or lodge a fresh “stay” application in the Constitutional Court.

It has been strongly argued that is where he should have gone in the first place because, as the country’s apex court, it’s also the only court that could stay an order it had handed down.

But Curlewis thought by the time he got a hearing for either, the rescission application would likely already have been finalised.

Zuma’s refrain this week has been that he is being detained without trial, but experts have dismissed this claim as having no basis in law and Madonsela yesterday agreed.

“He said he’s the first to be sent to jail for civil proceedings – that’s not true. He also says the first to go to jail without a ‘normal’ trial – that’s also not true,” said Madonsela. –