Is Lasizwe Dambuza about to be a dad?

Is Lasizwe Dambuza about to be a dad? 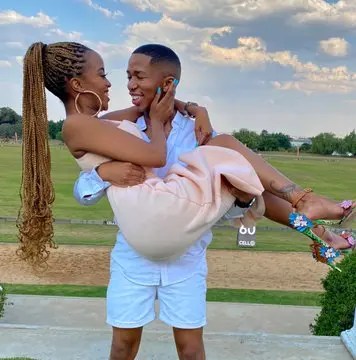 Lasizwe Dambuza has been talking about s*x and babies of late, to the point that fans are starting to wonder whether he is lowkey sending us a message. But it was his latest Tweet that sealed the deal in everyone’s mind.

This is not the first time that the comedian has talked about having kids. He once said that one of his life goals was to have biological children, which was confusing for many of his fans, because he is openly gay.

You don’t understand why it’s confusing? Well, he doesn’t want to go the science route; he said his fantasy is to actually sleep with a woman, get her pregnant, and have her bear his baby. Yes, we were confused too.

He had also previously said that if he weren’t gay, he would have already had three children. Yes, he loves kids, and his excitement to be a future dad kind of makes us root for it to happen for him soon.

Which is why his recent post is particularly exciting. The media personality recently took to Twitter, first to ask people about their experience with s*x, and what it had ruined for them. He received varied answers, from those who felt their fantasies were ruined, to those whose relationships ended after they got intimate.

What has sex ruined for you?

Ruined is a strong term! However it has taught me to not assume that the next party knows what theyre doing! Damn, the disappointment.

You decide to give him a taste?

Not long after, he tweeted saying that making babies is way too easy, when it should not be. Now, if the statement had come from anyone else, eyebrows probably wouldn’t have been raised. But coming from him, his fans now think it is a sign for an announcement he may be making soon.

Making babies shouldn’t be this easy.

Who did you impregnate? Do

As one fan asked him, how would he know how easy or difficult it is to make babies, which is a valid question. Considering many other followers were in his responses sharing their personal difficulties with conception, it cannot be something he heard around, because the experiences are 50/50.

How would you know it's easy, have you made one? pic.twitter.com/ZjLY5swDWQ

As you would imagine, the congratulations have started streaming in already. Maybe this is our chance to be internet aunties and uncles, and we are all pretty excited about it.

He is yet to respond to the congratulatory messages, and has not given further information on the origin of his statement. But if he is indeed about to be a dad, although we may be a little confused because of his sexuality, we are also ready to welcome the luckiest baby in Mzansi. Congratulations, Sweerie?