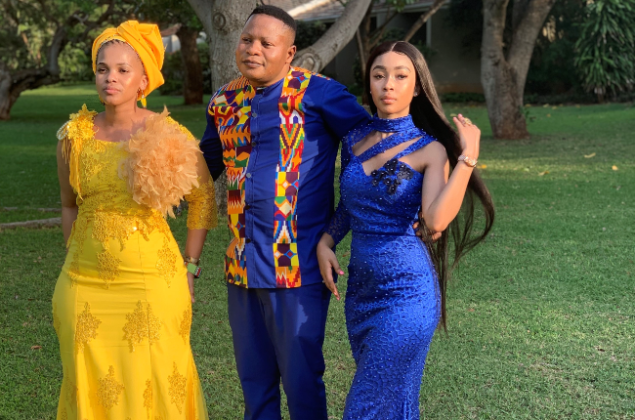 Lucky Gumbi is the new polygamist in town and lives happily with his two wives, Bayede 30, and Nombuso Gumbi, 24.

The polygamist made headlines in December 2018 when he splashed R4million on his second marriage to Nombuso.

Take a look at his multimillion mansion.

Their reality show premiered on SABC 1 November 7 at 18h00. The show is so popular so much so that it is getting an average of 1.7 million viewers per episode, making it the highest-rated reality show according to the Citizen.

However, it is certainly clear that Lucky Gumbi doesn’t get along with the other celebrity polygamist Musa Mseleku as they both exchanged some heated words.

Mzansi has already welcomed a family that practices polygamy and made their reality show one of Mzansi’s favourite. Uthando Nes’thembu follows the lives of Musa Mseleku and his four wives MaKhumalo, MaYeni, MaNgwabe, MaCele, and their children.

The new sheriff in town made a few comments about the popular Mzansi Magic show and Musa Mseleku is not too pleased by his words. Gumbi took to a very popular publication, to claim that Uthando Nes’thembu does not clearly display what polygamy is about. He said people will get to re-learn what true polygamy is about.

“I’m aware of the other reality show on TV about polygamy. With The Gumbis, people will get to see the true meaning of polygamy. In my polygamy there are no fights as I treat them equally. The older wife doesn’t control me or the second wife,” he told the publication.

These words ruffled Musa’s feathers and issued out a stern warning to Gumbi to not meddle into his family’s affairs. Mseleku says he made polygamy trend and said Gumbi should not compare his family to his. Gumbi also bragged about his wives not fighting and Mseleku found that worrying as his wives bicker from time to time.

“I don’t know this Gumbi and I’m sure he doesn’t know me, either. He must stop meddling in my house affairs. He has no right to compare his polygamy with mine. If anything, I’m the champion of polygamy and made the concept of isithembu a trend.”

He further said that had he not come out and made polygamy an accepted act in society, people like Gumbi would still be hiding in shame. “Talk is cheap. He needs to sit and take notes from me.”

“I have no doubt, had I not come out, many people including him would still be ashamed of it. My wives are vocal, have their own opinions and do challenge me sometimes. This can be attributed to the fact that they’re successful and independent. I did not use any love potion or muthi to shut them up and that is why they are free,” he proclaimed.

Musa then reiterated that his show is as real as it gets and is not scripted.

“My wives are real people with emotions and brains. That’s why they get angry sometimes. The show is not scripted and is presented as raw as it is.”