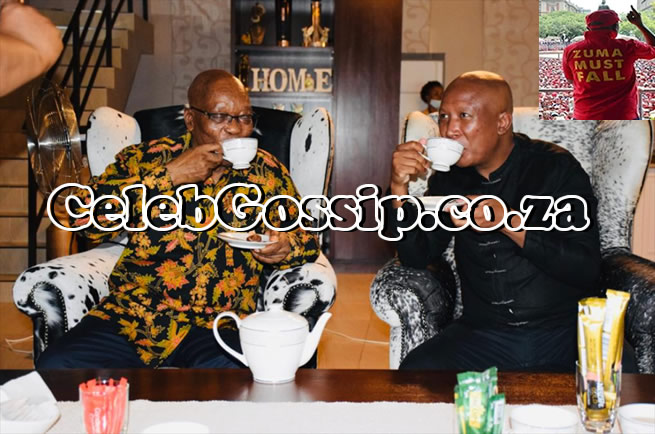 EFF leader Julius Malema’s trip to Nkandla on Friday was to persuade former president Jacob Zuma that cooperating with the Zondo commission would strengthen the fight against President Cyril Ramaphosa, a concerted battle that the red berets would gladly join.

It was also to tell Zuma that boycotting the commission would fuel a media-led public onslaught against him, whereas appearing at the hearing would help expose commission chairperson Deputy Chief Justice Raymond Zondo’s bias. Malema and fellow EFF leaders also have grievances against the commission, whose investigators have been scrutinising his bank accounts and those of people close to him.

Zuma has vowed to ignore a Constitutional Court order that he abide by the commission’s summonses for him to appear, saying he does not fear being imprisoned for his defiance.

Ramaphosa’s foes are looking to exploit pockets of dissatisfaction across government, the security forces and the ANC against the president, and are hoping to use Zuma’s stand-off with the Zondo commission as a lightning rod for their mobilisation.

At the meeting, Malema was expected to advise Zuma to change his mind about snubbing the commission. The argument was that such a move created a fertile environment for the media to launch an onslaught against him. However, if he did appear before Zondo, that would pave the way for a campaign focused on Zondo’s alleged bias and mismanagement of the commission.

Malema’s pitch to Zuma, which was canvassed among EFF leaders and also has the buy-in of certain ANC leaders, is premised on the belief that it will take some time for the Zondo Commission to complete its report and hand it over to Ramaphosa and Parliament.

“By the time this process is complete, according to this thinking, Ramaphosa would be politically weak in the ANC because of [his adversaries”] mobilisation, and [would be] unable to fully act on the commission’s recommendations. The main plan is for all progressive forces to fight from one side,” said a Zuma lobbyist.

Another Zuma loyalist described the move as the creation of “a broad alliance”.

As part of the fight-back plan, Parliament would also become a battleground, where the EFF would be expected to participate in the motion of no confidence against Ramaphosa. In addition, the EFF would use its platforms to focus on Ramaphosa’s flaws and mistakes in government.

Sources have revealed that Zuma’s allies believe Ramaphosa does not have a firm grip on the security cluster and that could be used to garner support on the grounds that the current government administration is ineffective.

“The State Security Agency is divided and there’s a lot of unhappiness about the way the agency’s operational secrets have been paraded in public at the state capture commission, with Ramaphosa’s approval,’ said a senior figure in the security cluster.

Another area of weakness is said to be the struggles within the SA Police Service’s higher echelons, where national commissioner Khehla Sitole has suspended members of the top brass.

An ANC-aligned retired military figure said senior officials within the SA National Defence Force were furious that Ramaphosa had ‘thrown them under the bus’ by government’s handling of the army’s procurement of the Interferon cancer drug from Cuba. Medical experts in the defence force had identified this as a possible immune-booster against Covid-19.

“They believe government should be in a position to tell the SA Health Products Regulatory Authority [Sahpra] to approve the use of Interferon among army members. If Sahpra can approve Ivermectin, which is an animal drug, what’s the difficulty with approving a cancer drug that’s been scientifically proven to work? It’s also not claimed to be a [Covid-19] cure.”

A senior army official said the propaganda against Interferon was driven by ideological hatred towards Cuba and possibly the economic interests of pharmaceutical companies with links to Ramaphosa.

“And we should remember Nelson Mandela’s words that no one should choose for us who our friends should be,” said the official.

Ace must contest because he has nothing to lose. He’s been treated unjustly, with state institutions being used against him. He must fight with everything he has, otherwise he’ll end up like John Block

As part of the offensive against Ramaphosa, there is a “national strategy” to defend Magashule, who is facing fraud and corruption charges, and is under pressure to step aside from the party, pending a criminal trial.

Plans are now under way to deploy so-called radical economic transformation forces on the ground to mobilise support for Magashule among not only ANC members, but also the general public. An ambitious part of the plan is to tout Magashule as a future candidate for the ANC presidency and to do so openly and defiantly, since the campaign season has yet to be sanctioned by the NEC.

“Ace must contest because he has nothing to lose. He’s been treated unjustly, with state institutions being used against him. He must fight with everything he has, otherwise he’ll end up like John Block,” said a close ally, referring to the former Northern Cape ANC chairperson who was jailed for corruption in 2018.

The strategy to undermine Ramaphosa included a drive to always have Magashule visible at public occasions such as funerals and commemorations. The fight would also be taken to Ramaphosa’s doorstep through a planned million-person march of the unemployed to the Union Buildings in Pretoria. The ANC’s women, youth, students and school pupils would be mobilised.

The anti-Ramaphosa group acknowledged that, while the president had better financial muscle, they were confident that they had better representation on the ground. The growth of ANC membership from 989 000 to 1.4 million under Magashule was expected to be used as a mobilising factor. “He won by a margin of 175 votes in Nasrec. He has no presence even on Facebook and Twitter – where Tito Mboweni is fighting alone. Many of Ramaphosa’s lobbyists are wearing high heels and are not on the ground,” said a source.

Another part of the strategy was to closely observe the way the Hawks and National Prosecuting Authority (NPA) were treating criminal cases of people aligned to Ramaphosa.
“Where evidence of political interference is obtained, charges would be lodged against the most senior Hawks and National Prosecuting Authority officials for manipulating the justice system,” said the source.

“We’re saying there’s interference in the work of the criminal justice system by the current regime. All those serving as Ramaphosa’s proxies must know that they have only one year left in office.”

Zuma’s lobbyists are also working around the clock to secure an ANC election victory for his backers in North West and Mpumalanga, where provincial conferences to elect new leadership have long been pending, but were postponed on several occasions due to lockdown.

“If he wins the North West, then we can look at pushing him for a position at national level in the next national conference, but for now he’s the only one we have in that province,” said the source.

In Mpumalanga, described by a Zuma lobbyist as ‘solid’, acting ANC chairperson Mandla Ndlovu has been mentioned as a favourite candidate for the Zuma group.

“And the ANC in KwaZulu-Natal is focused on pushing for unity among its ranks to ensure that, at the next national conference, they don’t lose out again on a top six position, as happened at Nasrec due to divisions,” said the source.

However, the strongly pro-Ramaphosa Eastern Cape has been difficult to penetrate since Zuma’s key lobbyist there, Andile Lungisa, faces criminal charges and jail.

Last month, Limpopo ANC member Ernest Netshivhumbe filed a corruption complaint with the police against Ramaphosa and mining giant Glencore. This came after Molefe’s statement that the then deputy president aided the company in which he had previously had an interest.

“Mr Molefe testified that Mr Ramaphosa, while the de facto chairperson of Eskom, unduly used his political influence to his personal benefit and, by extension, to the financial benefit of Glencore by pressurising Eskom officials to write off a R1 billion debt owed to Eskom, resulting in Eskom incurring a financial loss of R1 billion and Glencore’s unjustified enrichment,” he wrote.

Netshivhumbe said this week that “the police in Makhado refused to open the case against a fellow Venda president”, but he had eventually got assistance from the provincial Serious Organised Crime Investigation office of the Hawks.

He said he had since learnt that the Hawks had escalated the complaint to the investigative arm of the NPA. He had then heard from a ‘general’- whom he refused to name – that the case would not be entertained, said Netshivhumbe.

“This is a war for accountability and what you do on the left you must also do on the right, so Cyril must also be held accountable,” he said.