I’m nothing like you – Former President of America, Barack Obama throws Trevor Noah under the bus

I’m nothing like you – Former President of America, Barack Obama throws Trevor Noah under the bus 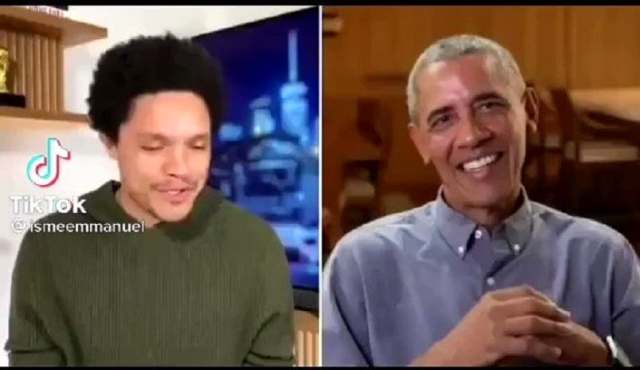 Trevor Noah is undoubtedly one of the best comedians in the game and comedians are known for their tongue-in-cheek humour. These often leave them with a huge egg on the face and so is the case with this SA-born comedian.

Social media users brought up a previous interview he had with former President of the United States, Barack Obama, where they both had a very light-hearted conversation that delved deeper into politics. The two had a very thought-provoking conversation which social media managed to twist and made it into a roast fest.

In the clip, Trevor asks Barack Obama how has he managed to transition from being president of the US to being “an ordinary citizen.” He asked him how does he view or react to social issues he sees on television as a person who is no longer in that ‘powerful position.’

“When you transition back to personal life, I wonder what that is like, because unlike you I do not have that power to change the world or do something about it. Because in many ways you are like me…you see a thing on TV and you get angry or sad and can’t really do something about it,” asked Trevor.

Barack Obama laughed off the “insult” and responded by saying “Well, first of all I am not anything like you. I still have a lot more influence and clout. So let’s just be clear and try to keep things in perspective.”