Hero man stabbed and left blind speaks out: I would rather die fighting for a woman not to be raped

Hero man stabbed and left blind speaks out: I would rather die fighting for a woman not to be raped 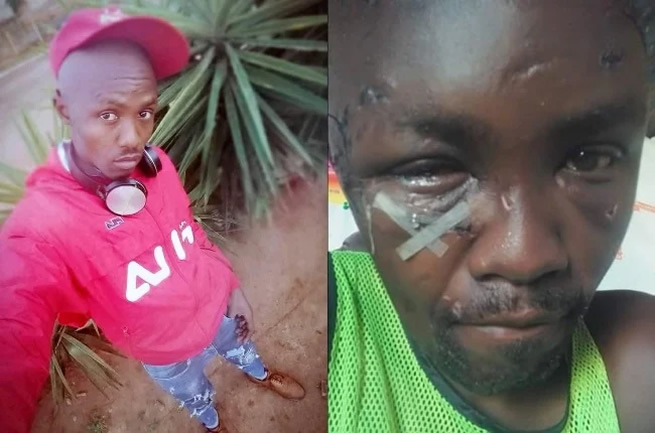 It was supposed to be a normal Saturday night, as Asanda and his friends shared a couple of beers and chilled at a local pub in Gqebera, formerly Port Elizabeth. But suddenly he saw his female friend being forcefully grabbed by a man in the dark.

Asanda Ndlebe (35) leapt to her defence and sustained terrible injuries for his courage, including being left blind in one eye. Speaking to Drum about that terrible night he said.

“The incident happened two weeks ago, and I was with a female friend of mine from my area. We went to a local pub and while I was sitting there drinking, something said to me I should go outside and pee. I went outside and that’s when I saw a man forcing my female friend to leave with him,” he said.
He was grabbing her, wanting to sleep with her saying things like, ‘You are leaving with me’. That’s when I knew she was in danger. I told him to stop and he slapped me and pushed me until I fell.”

Asanda realised the man was more powerful than him, so he found something to defend himself with.

“I quickly ran to my place to grab a knife so I could defend myself. I wanted to scare him because I had never stabbed anyone, but he grabbed the knife from my hand and he defeated me until I fell.

“That’s when he started hitting me with a sharp rock on my face and my eye. People started coming out to stop him from hurting me but by that time, I was already unconscious. I woke up in the hospital accompanied by my friends.”

Asanda says he had to defend his friend because he couldn’t just allow a man to harm a woman while he watched. He says he wanted to be the change he wanted to see.

“I was very touched by the situation and I decided to be brave because I wanted to help. It’s not right for men to abuse women. I thought to myself I would rather die fighting for a woman not to be raped than to watch and do nothing about it.

“My left eye is now blind, and the doctor said there is a chance it may not see again. But I have hope it will heal and I will see very soon. The eye is open and it looks like it works but I can’t see with it.”

Asanda Ndlebe became a hero when he helped a woman from being raped.

Apart from combating gender-based violence, Asanda is a passionate traditional dancer who often teaches children in his neighbourhood and motivates them to stay out of trouble. He doesn’t have a steady income but maintains himself through small jobs he receives every now and then.

“I teach children how to do traditional dancing and my dancing has taken me to places I never thought were imaginable. I am an artist and I have even travelled abroad to perform overseas in the past years. I want to make a positive impact. I want to do good things in my neighbourhood.

“I wish I could get the opportunity to be financially stable and have the means to register my group so I can have sponsors to push the kids dancing forward. The kids I train are disciplined. I deal with children between the ages of 10 and 15. I motivate them also to do their homework and be people with good morals”