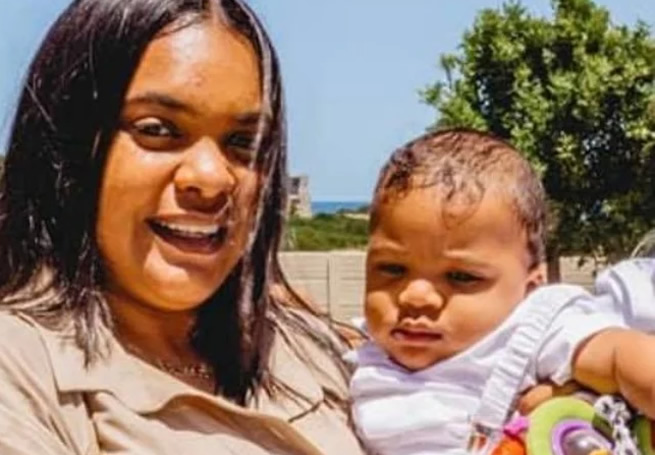 This can’t be right, she thought. How could her eight-month-old baby be having a stroke? Surely it had to be a mistake?

But as Amber Benjamin soon discovered, there was no error. Her baby boy, Blaine, had indeed had a stroke and now faces a lifetime of medical treatment.

Her son was a strong, healthy and happy baby, Amber revealed. Then in December last year he developed a fever. The right side of his body went limp and the right half of his face was contorted.

Amber (24), a law enforcement officer who lives with her parents in Hawston, near Hermanus in the Western Cape, rushed her son to a nearby hospital but doctors there said they couldn’t find anything wrong with Blaine and he was discharged. “They told me to monitor him. We went home at 4pm and took a nap till 6pm.

“The doctor phoned to follow up and I told him the right side of Blaine’s body was still lame and he didn’t want to eat. He said we had to come back to the hospital,” she says.

They were met by paediatrician Dr Elna Gibson who sent Blaine for a CT scan of his brain which confirmed their fear: the baby had suffered a stroke.

Amber Benjamin says she’s still coming to terms with the fact that her son had a stroke.

“During this whole process, I was crying,” Amber recalls. “I was trying to call my parents at home and trying to figure out how my eight-month-old baby could have had a stroke. How could this happen to a baby?”

Blaine was transferred to Constantiaberg Mediclinic in Cape Town, where paediatric nephrologist Dr Jonathan Buckley ran blood tests and scans over four days. “I couldn’t handle all the tests they were doing,” Amber says. “I couldn’t take the fact that they were sedating him in my arms. When I was sitting next to his bed during all the scans, I’d say, “Fight, Blainey; fight, Blainey”. I felt broken.”

While in hospital Blaine suffered epileptic seizures over the course of three days, and now has to take a daily dose of aspirin and epilepsy medication.

Then, finally, after eight long days, Amber got answers. Doctors diagnosed Blaine with a rare condition, Antiphospholipid syndrome (APS) – it was the reason he’d had a stroke.

Blaine was a strong baby who was learning to crawl and talk when he had the stroke in December last year.

His family had hoped he’d follow in the footsteps of his granddad, Franklin, and become a rugby player when he was older, but those dreams have been dashed. APS is a disorder in which the immune system attacks normal proteins in the blood and can cause blood clots to form in the arteries, veins and organs.

“Doctors have been scratching their heads because they don’t know how to treat Blaine, Amber says. ”

They said they can’t believe it happened to a healthy baby.”

A 2008 study found only 141 children worldwide have APS, and Blaine’s doctors believe he’s the only child in South Africa with it.

“Dr Buckley sent all of his medical information to a paediatrician in Canada to get advice on how to treat Blaine, but we’re still waiting on feedback,” Amber says.

The single mom still can’t believe what happened. “I had a lekker pregnancy. The birth was amazing. I was in labour for 10 minutes then Blaine came out. Everything was normal.”

She knew something was wrong in the early hours of 5 December, when she felt Blaine’s temperature rising as he lay in bed next to her. She thought it was because of the summer heat, but when she got up at 6am to get ready for work, Blaine was still fast asleep.

“Normally when I wake up, he’s up.” Franklin woke him up to give him his morning bottle, and Blaine dozed off again.

When he later woke up, Franklin noticed he was struggling to move the right side of his body.

“When my dad made a joke to get him to laugh, he saw Blaine’s mouth was crooked when he smiled,” Amber says. Franklin called his wife, Diane, who contacted Amber at work. Diane then took Blaine to a paediatrician, who said the baby had tonsillitis.

“My mom didn’t dispute it because that’s what the doctor said. He was prescribed penicillin, and my mom immediately gave him a dose,” Amber says. She came home during her lunch break and knew something more serious was going on.

“When I touched his arm, it was just lame and swollen. When I lifted his arm and right leg, it just fell,” Amber says. “Now I have to accept there’ll always be something wrong with him.”

Blaine is a fighter, Amber says. “For now, he’s standing up and walking along, holding on to the furniture. When he walks, his right foot drags, he struggles to move his right leg forward, so we know it’s going to take a while before he can walk properly.”

Blaine has been going for weekly physiotherapy and speech therapy sessions to restore function to his right side. He also does ball exercises to build up his strength and may need to get a splint on his leg to correct its position, as it’s facing inward.

Amber is drowning in medical bills as she’s the only one working at home.

“I need to be strong and settle the amounts as soon as I can because I know I’ll have more bills when Blaine gets admitted to the hospital again.”

Amber and her parents must keep an eye on Blaine to prevent him from hurting himself.

“If he bleeds, he won’t stop bleeding,” she says.

This is because Blaine takes aspirin to thin his blood. He must take this, as well as medication to prevent seizures, for the rest of his life.