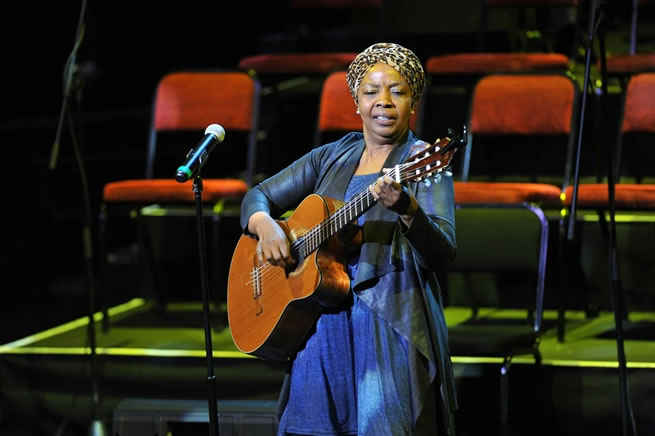 Legendary musician Tu Nokwe is dropping her fight for recognition as the original creator of the world-renowned hit musical Sarafina!

In March, the actress told delegates at the Unisa Miriam Makeba intergenerational dialogue that she would take playwright Mbongeni Ngema to task to credit her as the original writer of the hit show.

On Wednesday, Nokwe said she had decided to give up her fight for Sarafina! after talks between her legal representatives and the director hit a snag.

“I was approaching him this year to give him a chance for acknowledgement and formalisation and for it to be noted that it has been so many years later and that it must be noted how much I am owed. That is where I came from and not to say they must pay me all at once.

“He was cooperating, and he asked me to send him a WhatsApp message. I got an intellectual property lawyer to advise, and we were all on the same page.

He told me he was in hospital and had asked me to give him a week, only to find that my lawyer is also his lawyer. He advised he arranged a round table with me, Mbongeni, some publishers and, while we were waiting for a date for the round table and after he spoke to Mbongeni, he never came back to me. So, what that meant for me was that he refused.

The world-renowned musician, who broke to prominence when she played the role of Phatha, Shaka Zulu’s wife, in the Shaka Zulu movie in 1986, said she did not want this matter to be a media spectacle and had sent Ngema a letter of demand twice.

“I was coming to him with humility, but you can’t change the truth no matter how hard you try. I forgave him a long time ago, but it is good to acknowledge when you are wrong so that you can fix things.”

Nokwe said she was introduced to Ngema over 40 years ago by Phumzile Mlambo-Ngcuka after she told her about an idea for this show.

I remember how I wrote the characters. Whoopi Goldberg’s character, the teacher, was modelled after me, Phumzile, and how we both think. Then Leleti’s character was also built from the children I used to work with.

It was a stage musical play in 1988 and won various awards, as well as an international Tony award nomination.

Ngema was not available to comment on the story by the time of publishing.

Nokwe said she had dropped her intentions to take the legal route to get accredited for writing the show.

The reason I was asking him for us to settle this matter now was for the truth to be out there while we are both still alive. I don’t want us to take this to the afterlife.