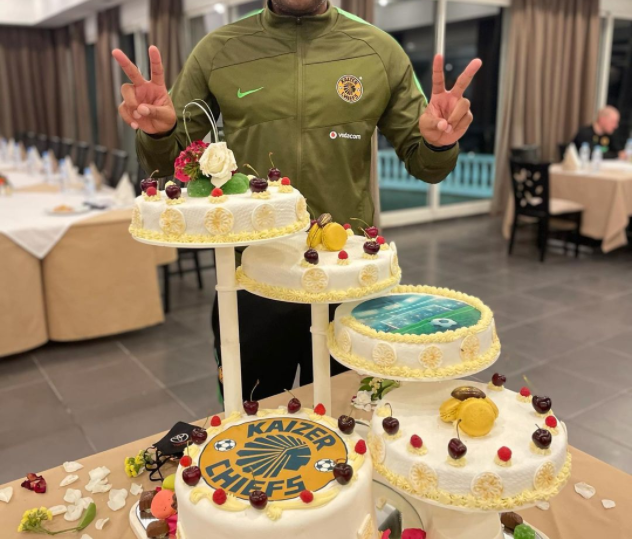 Itumeleng Khune, goalkeeper and captain of Kaizer Chiefs in the Premier Soccer League, & the South African national team celebrates birthday today. Throughout his football career, Itumeleng has earned himself a number of accolades and has even been rated in the top 10 by FIFA.

His time on the field has seen him also having to appear before the PSL because of what he had said. Besides his career, his love life has also been of much interest to the public since the time he was dating Minnie Dlamini to Sbahle Mpisane and now is married to Sphelele Makhunga.

However, what had Itumeleng trending for the wrongs reasons was when the goalie got caught up in a scandal that sent Twitter into a frenzy where he was associated with an 18 year old.

As he celebrates another trip around the sun, here’s a look at what he’s been up to.The loss of a loved one is always the hardest and when Itumeleng lost his sister Mapula, him and his family were hit the hardest. Mapula was found dead in their family home in her room at their grandmother’s house in Venterdorp.

A source said that Khune’s sister was the victim of a home invasion. It seems she was living in the back room because the main house itself did not burn down.

Things took a turn for the worst when what started off as an ‘inquest’ turned to be a devastating case of murder and an additional charge of assault with the intent to do grievous bodily harm was added.

Itumeleng dragged for being drunk

‘Let’s go home buddy, tomorrow’s another day’ is the statement one would hear from their friend/s when they’ve probably had too much at a party and it’s time to wrap it up. Sadly for Itumeleng, that wasn’t the case.

During a night out with his friends, Itumeleng Khune left social media divided when a video of the athlete was leaked, having fun with friends, while trying to get off a bus.

Some slammed him for the “embarrassing” video, while others are split between being outraged at how drunk the Bafana Bafana athlete was and others defended him saying he was just partying while side lined because of an injury.
Itumeleng loses his job

Itumeleng Khune went on a rant on Twitter, slamming the Premier Soccer League for the poor standard of refereeing in the country after he had been given a few warnings for time wasting in a game.

Vaseline, Itumeleng Khune’s personal sponsors were not keen on the goalkeeper’s actions and because of that his contract with Vaseline was cut short. Vaseline did not like the bad publicity, Itumeleng was giving them.

Its about time action is taken against this referees by @OfficialPSL.they've been very poor since beginning of the season.😡😡😡😡

After television and media personality Minnie Dlamini, announced that she’s given birth to her first child, Kaizer Chiefs goalie Itumeleng Khune was found trending on Twitter as many were dragging him for dumping her for Sbahle Mpisane.

Tweeps were assuming that he probably suffered from chest pains after learning that Minnie had a bun baking in the oven. The two were once an item but they broke up before Minnie became Mrs. Jones.

Just before this happened, Minnie had opened up about her relationship with ex-boyfriend Itumeleng and what she had to say shook many. Minnie said she was feeling like herself again and that her wounds from that relationship had healed. She also confirmed that there were no feelings of hatred or resentment between her and Itumeleng.

But people were still left with the question as to what led to them breaking up.

Itumeleng and Sphelele are couple goals

Itumeleng Khune is smitten with his wife. The Bafana Bafana captain and Sphelele Makhunga have earned themselves a spot in the hottest couples in Mzansi Celeb world.

The two do not shy away from showcasing their passion for each other on social media. When his wife shared a hot picture of her wearing a black Nike crop top and matching leggings, Itumeleng Khune retweeted the same picture and captioned it: “A lot wifey,” accompanied by a rose and two heart emojis.