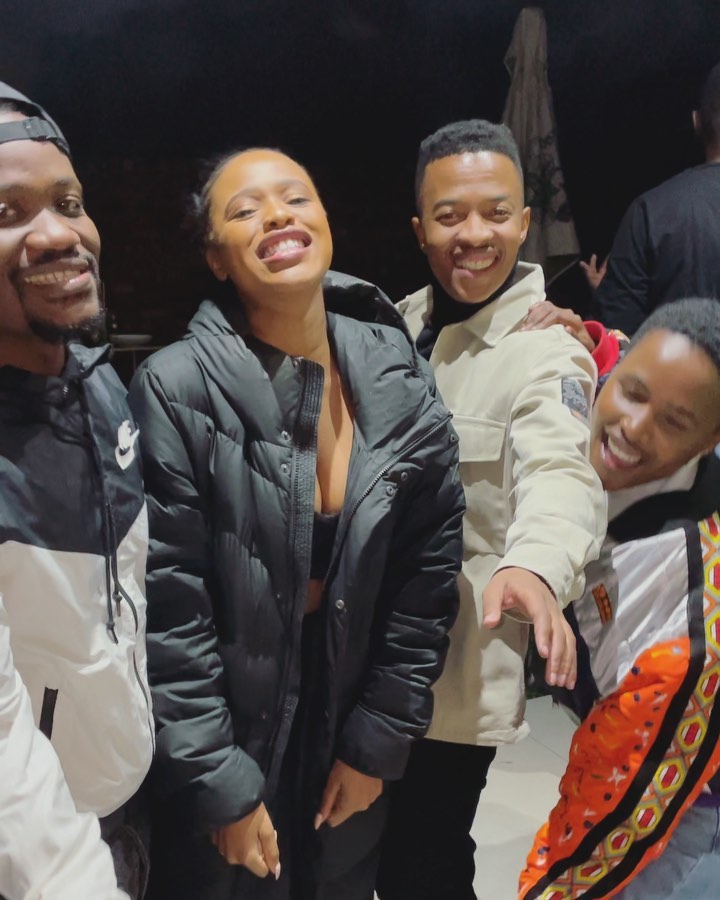 Legendary Skeem Saam cast members Natasha Thahane, Nozuko Ncayiyane, Clement Maosa and Oros Mampofu recently got together to entertain their day one fans, after taking on a cover of the Skeem Saam soundtrack performed by Motswako rapper Tuks Senganga.

The video was shared by Oros on social media. “Who remembers this squad from SKEEM SAM!??! Feeling nostalgic today looking at how far I’ve come with these beautiful people. What were there Character names?? Say it with me now!! SKEEM SAAAMI!”

Natasha left Skeem Saam in 2016 to pursue other opportunities and it appears that decision has paid off. Shortly after she joined award-winning South African productions, The Queen and Lockdown Mzansi. Thahane also took some time to sharpen her acting skills. She attended New York Film Academy and took part in the NYFA: Acting For Film Program. She graduated in 2018.
This was followed by a life-changing role on Netflix’ hit series Blood & Water where she stars as Wendy Dlamini. Season two is set to be released on Netflix this year.

Oros Mampofu also left Skeem Saam in 2016 after his character, Jama, was poisoned. In 2017, he joined e.TV’s drama Harvest. This was followed by a role in Ingoma. And in 2019 he started appearing in Rhythm City as Banele. According to a statement released by e.tv, “Banele’s story is that of trials and tribulations. He is the first person in his family to go to university and that becomes both a great privilege and a massive responsibility as his family heavily relies on him for help. Being the sole breadwinner is no glitz and glam and Banele quickly finds himself working as a recycler in order to send money back home.”

Nozuko, who also left the soapie in 2016 joined e.tv Scandal the same year as Phindile and received praise for his acting skills. She currently stars as Nox in Mzansi’s newest hit telenovela Diep City.
“I wish I had a long deep caption but I’ve just had a really long talk with my God and I’m left with no words to express how grateful I am for this blessing. I pray Nox heals you as much as she continues to heal me each time we walk the streets of Diepsloot.” She said about her new role.