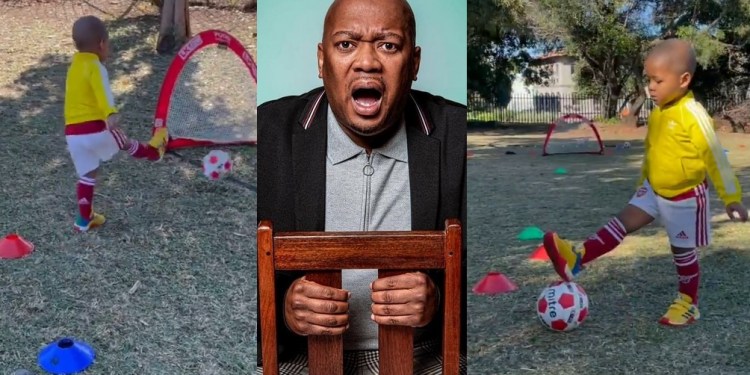 Like father, like son? Generations the Legacy actor Kope Makgae who plays the role of Mrekza Makhafula on the SABAC 1 soapie, is set to experience otherwise. His twin son Kopello Zoyl Makgae is interested in soccer, and the boy has top goal-scoring skills.

Not eager to follow his fathers’ acting footsteps, Kopello is an Arsenal and Orlando Pirates supporter. He spends weekends on the training field with his coach and supporting dad.

Dubbed the next Mzansi soccer star due to ball control and scoring abilities, comparisons were made to current Bafana Bafana and Al Ahly winger Percy “Lion of Judah” Tau, who did a brief stint in the English Premier League with Brighton and Hove.

It seems talent flows in the Makgae blood; Mrekza is a man of many talents; when he is off our small screens on Generations The Legacy, he will be in the studio making music. He is a businessman, film producer and stage performer, his twins Zoey Koepelletswe “Toto” Makgae and Kopello Zoyl Makgae are also good swimmers. Mzansi, brace yourselves; we might have our next swimming Olympic Champion from the Makgae family.

In real life, Mrekza is married to his wife, Mpotseng; she is athletic and fitness enthusiastic who usually hangs out with her twins for fitness training.

Apart from on-field skills, the Makgae twin brother is into driving; together with his sister, they often congest their home driveway with traffic while driving their mini cars. Mrekza, at one point, shared a video of his son driving a real car to the shock of South Africans.

Speaking on his son’s talent, Mrekza revealed that Zoyl loves football; he is eager to learn new skills and is inseparable from his soccer ball.

“We are not rushing him; we just want him to develop the love, discipline and skills for the sport he loves. The natural skills are there, and with proper development, I think we have a gem here.” – Kope Makgae.