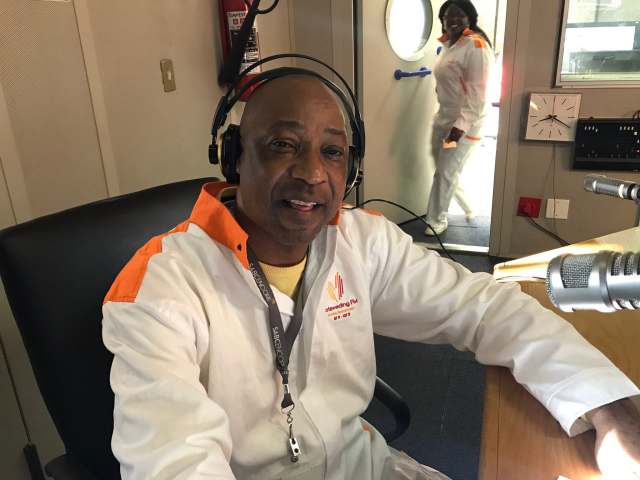 Retired Motsweding FM broadcaster Snyman Rankane was arrested by the police in North West after he allegedly beat his wife and violently pushed her that she hit her head against a kitchen island.

The incident occurred at their marital home in Brits on Saturday last week. Relating her ordeal, Rankane’s wife, who did not want to be named, said she was at home when her husband arrived and demanded that her sister’s daughter, whom they have been living with for many years, vacate the house because he wanted to live in peace.

She said when she objected to his demand, he threatened to go to the magistrate’s court to obtain a protection order against her. “I said over my dead body …When we were buying the house, I paid R500 000 deposit, which I got from my late husband’s pension funds,” she said.

“I told him that we are married in community of property.”

Rankane’s wife further accused him of wanting to kick the girl out of the house because he wanted to sleep with her, but she rejected his s.e.xual advances.

“The girl told me that he had been wanting to sleep with her, but she rejected him. That is why he wanted to kick her out.”

She said after the argument, Rankane started burning what appeared to be muthi on their stove in the kitchen, adding that she went to the stove and extinguished the burning stuff.

He got so angry, slapped, and pushed me. I hit my head against the kitchen island and fell on the floor … I drove to the police station,” she said. She added that the police initially refused to help her open a case, saying Rankane had the right to burn the stuff in the house.

After a few minutes, she said, Rankane arrived at the police station and the star-struck police officers mobbed him, took him aside, and spoke to him privately.

When she asked why they were not arresting him, she said they told her that Rankane had opened a case against her for violating the protection order he obtained against her.

“I told them the protection order only prohibits me from giving people a lift in my car. So I asked them what does the assault have to do with that? They told me to go and sleep at my mother’s house, which I did.”

Rankane promised to respond, but had not done so at the time of going to print. Police spokesperson Adele Myburgh confirmed that the couple was arrested on Sunday and released on Monday after they agreed to withdraw cases against each other.