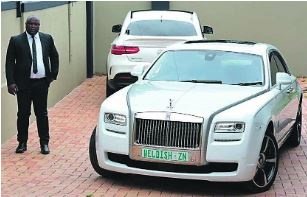 THE owner of one of Mzansi’s most popular lounges has apparently sold his expensive luxury cars to pay the taxman.Our sister paper City Press reported that Jabulani “Mjay” Nzama, who owns Eyadini Lounge in Umlazi,Durban auctioned his luxurious Rolls-Royce Phantom and Mercedes-Benz AMG GLE 63, worth at least R8 million, to pay his SARS rumoured to be in the millions.

He told the paper, “Obviously selling my cars would help me pay my debts, including the money I owe to Sars. But my vision of selling these cars is big as I want to venture into other businesses, which I will disclose when the time is right.”

Mjay also said his enemies were behind the rumours that his cars were repossessed.

“This is fake news. My cars were not repossessed. I volunteered to put my cars on auction because I realised that they were not bringing in money, yet I was paying a fortune every month.

“The competition is tough in this business. I am the only one whose Instagram account has managed to reach 500K followers. I am aware that not everyone is going to be happy for me and the success of my business.”