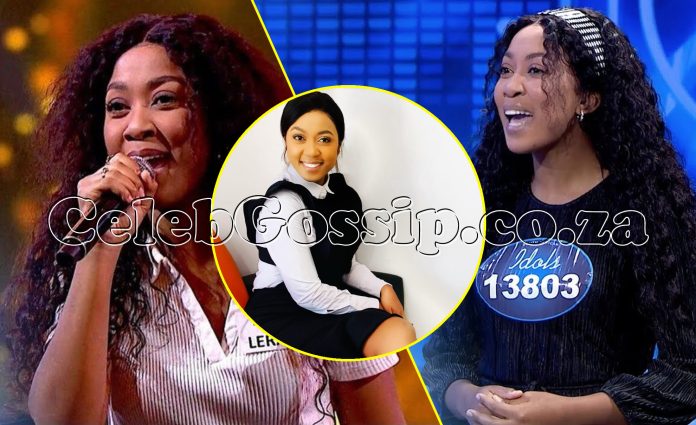 After two failed attempts at the title, evicted Idols SA contestant Lerato Matsabu does not plan to return to the singing competition.

Matsabu first auditioned on the singing platform over 10 years ago when she was 16 years old and despite not nailing her audition by receiving four nos from the judges at the time, Matsabu tried her luck again this year at the age of 27. She made it to the top 10.

Speaking to the media on Monday, Matsabu expressed grief about not securing her spot in the top 9 but was content with how things turned out. She plans to continue to pursue her singing career and hopes to collaborate with the likes of Samthing Soweto.

“I’m going through mixed emotions but I am good overall,” said the 27-year-old after her elimination.

“My heart sank the minute ProVerb called out my name and announced that I was being eliminated, but one thing I am grateful for is that I was able to make it to the top 10 and that God was able to push me that far.

“Yes, it sucks and it stung my heart a little bit because I wanted to win the title more than anything but I do believe bigger and better things lie ahead for me,” said the Johannesburg-born singer, who wants nothing more than to follow her dreams.

Matsabu describes her journey on Idols SA as a “rollercoaster ride” that had a few twists and turns that she had to navigate through. She recalls panel judge Thabo “JR” Bogopa being instrumental at her audition earlier this year, leading her to fight even more for her position in the singing competition.

“I had a lot of sleepless nights and had to consistently push to make sure I stayed at the top of my game. Looking back, the end was worth it because I know I gave it my all,” she said.

Matsabu started singing as a child. She sang at her mother’s church and was also a member of a rock church band in her teens. Singing lead made her believe she had a voice that belonged on stage. She took all the compliments regarding her singing and used them to fuel her desire to fulfil her lifelong dream.

Her memorable moment in the competition was singing on stage with Afro-soul songstress Nomfundo Moh and performing a rendition of American singer Doja Cat’s song Kiss Me More, a tune that she describes as “completely out of her range” but which helped her get out of her shell. “That performance was very memorable because I had fun on stage singing that song, I wasn’t overthinking anything, all I did was just enjoying it!”

With her musical heroes being predominantly women who are considered “powerhouses” in the music sphere, from the likes of Beyoncé, Jazmine Sullivan, Alicia Keys and Yebba, Matsabu promises to follow in their footsteps and make her mark as an Afro-soul and amapiano singer.

She plans to juggle her singing career with her normal job as a human resources manager at the company she works for.

“Being eliminated from Idols the first time was somewhat a setback because for the longest time I thought I couldn’t sing. It took a lot of convincing from my mother and other family members to audition again and I remember telling myself I had to come back to give it one more try, and I’m glad I did,” she said.

“Singing has always been a dream of mine, and despite things not working out for me on Idols, I promised myself that I won’t let that deter me.

“I can safely say it’s the end of the road for me in terms of entering the competition. I believe I’ve learnt what I had to and now it’s time for me to implement that entirety outside in the music industry… I’ll also do so by creating new music.”