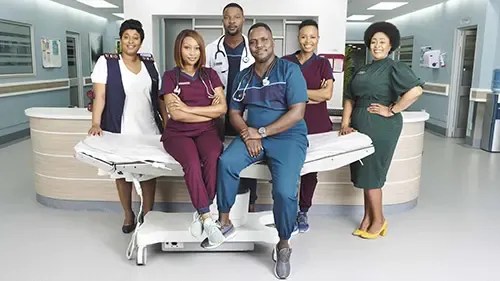 Coming up on Durban Gen this October 2021: Sibusiso’s will has shocking revelations for both Agatha and Mbali. The Generals do stellar work to save the lives of those injured at the cemetery. It turns out there’s nothing MacGyver about MacGyver.

Thabo reveals the deep Dlamini secret. Lindelani and Mbali fall back into each other’s arms. MacGyver takes it upon himself to keep Calvin alive.

Durban prison is no place for a Doctor, which is where Thabo finds himself on one of the most tragically important days of his life.

Sibusiso’s will has shocking revelations for both Agatha and Mbali. The Generals do stellar work to save the lives of those injured at the cemetery. It turns out there’s nothing MacGyver about MacGyver.

Post Sibusiso’s surprising will is read and there’s extreme tension in the commune between Mbali and Mrs Dlamini. When Mrs Dlamini accuses Mbali of it all, how far will both women go to prove their point?

Lindelani pays Mbali a visit at the wrong time. Ngcobo learns he has to part ways with Durban Gen. Calvin enforces his new house rules on Bab’Gumede.

It’s a bittersweet day for Ngcobo as he bids farewell to Durban Gen.

Bab’Gumede comes to the realisation that there’s nothing left for him here anymore… and it seems Cupid’s magical gold-tipped arrow has struck MacGyver!

Mbali and Lindelani move from strength to strength while Agatha tries to reinvent herself without her children by her side. Sibiya learns a tragic truth and Calvin and Bab Gumede are still at odds.

Nobody knows how Thabo is free. Bab Gumede is caught red-handed with his pants down.

Thabo continues to unravel as Mbali wants a deeper connection with Lindelani. Sibiya struggles to keep his head up, while Phumeza tries to help. Nkabinde is suspicious about what is going on in the on-call room.

Thabo drowns his sorrows and things get out of hand. Agatha causes an embarrassing scene at the hospital. Bab’Gumede makes a huge decision about his future.

Thabo is rendered homeless. Mbali struggles to deal with the embarrassment at work. Bab’ Gumede’s farewell takes an unexpected turn.

Lindelani starts to wonder if there’s any validity to the concept of isinyama. An unruly Thabo throws up on his mother. Bab’Gumede faces the wrath of Sylvia’s new man.

Lindelani tries to stay clear of Mbali as he struggles with everyday medicine. MacGyver is caught in an uncompromising position and Msizi tries to plead Bab’Gumede’s case to Sylvia.

The doctors try to assess the MacGyver and Simon medical case to come up with a solution but they are reeled into their drama.

An hysterical Ntombi thinks she has to make a choice between saving her husband and side. Sylvia refuses to take Bab’Gumede in and he has to go back home with Msizi.

Sne holds on to the hope that MacGyver will wake up. Determined to win Sylvia back, Bab’Gumede challenges the new man in her life to a stick fight, but will he come up on top?

Lindelani is rushed to a ward after passing out and they find nothing wrong with him, even though he knows he thinks it’s isinyama. He begs Mbali to do the cleansing but will she finally agree?

Mrs Dlamini is in a ring with debt collectors, neighbours and God. MacGyver can’t get it up and Zandile wants to bring Lindelani down.

Mbali is hopeful that with all the chores she does for the Dlaminis, she will finally get what she wants.

Mbali is not ready for what Mrs Dlamini asks of her. MacGyver has a new hot chick. While Bhengu is up in everybody’s business.

Mbali gets the key to her cleansing; and that’s by agreeing with Mrs Dlamini’s proposal. Lindelani has no choice given by Msomi, while MacGyver finally tastes some vanilla swirl, but is it more vanilla than chakalaka?

Premiere episodes of Durban Gen air on e.tv from Mondays to Fridays at 18h30. Episodes repeat on e.tv and eExtra the following day at 13h30 and 11h15 respectively. The omnibus airs on e.tv on Sundays at 10h20.