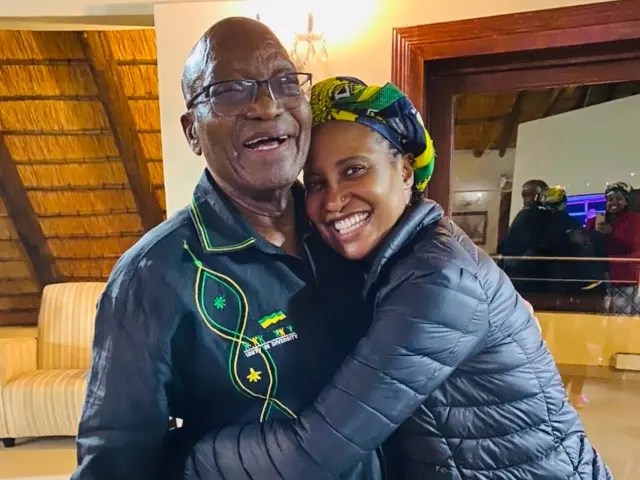 Not content with just defending her father, Duduzile Zuma-Sambudla, the outspoken daughter former president Jacob Zuma, is now peddling conspiracy theories about the fire at Parliament.

Zuma-Sambudla on Sunday night suggested the fire was started to delay the upcoming vote of no confidence against President Cyril Ramaphosa.

“There is no such thing as a coincidence,” she tweeted.

There Is No Such Thing As A Coincidence!Could This Bcause Of The Upcoming Vote Of No Confidence Brought By @ATMovement_SA?This Is A Sign To Move Parliament To PTA.Why Must Our Parliament Be In A Province Where The Settlers Arrived&Started Our Problems?Those Statues Must Also Fall pic.twitter.com/PqmTgMo6l6

She then added her voice to the EFF’s calls to move Parliament to Pretoria.

“This is a sign to move Parliament to Pretoria,” she said. “Why must our Parliament be in a province where the settlers arrived and started our problems?”

During the July unrest last year, Zuma-Sambudla seemed to encourage the rioting and looting by using the words “we see you” when retweeting videos and pictures of the unrest.

On Sunday she was again posting inflammatory tweets about the fire that broke out at Parliament.

Zuma-Sambudla posted a photo of a parliamentary building in flames with the caption: “Cape Town… we see you! Amandla!”

In another post she praised the person responsible for the fire with the words “Give the guy a Bell’s”.

Give The Guy A Bell’s… pic.twitter.com/pwp3GD16HY

July unrest
Zuma-Sambudla’s tweets were worryingly similar to the tweets she posted during the July unrest in 2021.

She also tweeted the words “we see you” in December after the Pretoria High Court revoked her father’s medical parole.

With more than 175,000 followers, Zuma-Sambudla has a significant reach on Twitter. Her latest tweets comes amid fears that a fresh round of violence could be imminent.

“There is a continuing threat of unrest and you must always remember that in politics, what matters the most is that threat,” said political analyst Sandile Swana in reaction to Zuma-Sambudla’s tweets in December.

Paul Hoffman, of nonprofit civil society organization Accountability Now, however, said that the July unrest only began after Zuma was incarcerated and said that with a relatively lengthy appeal process likely ahead, more unrest – if it did occur again – was probably still a while away.