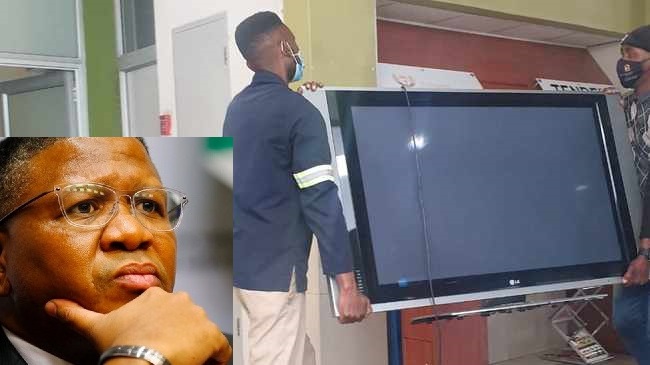 The Deputy sheriff swooped on the offices of the national Department of Transport last week and attached state assets, including computers used by Minister Fikile Mbalula and his deputy Dikeledi Magadzi over unpaid money.

The Pretoria News understands the attachment was related to millions of rand owed to road accident victims by the Road Accident Fund (RAF).

The attachment was made after the Gauteng High Court, Pretoria, on July 28 dismissed a case brought by the RAF against Ehlers Attorneys, in which it made a failed attempt to block the sheriff from attaching, removing and selling state property on behalf of the law firm.

Mbalula’s spokesperson, Lawrence Venkile, said the execution of writ was issued against the department even if it was not party to the legal fight the RAF was embroiled in with the law firm representing the road accident victims.

On Friday there was a flurry of activity at the department’s offices when the sheriff moved in to remove assets such as the desk, computers, laptops, fridges and flat-screen TVs.

Venkile said the attached assets included “computers from the offices of both the minister and the deputy minister”.

He said the asset removal would impact on service delivery. “Any disruption to business continuity of a department of state does impact on the department’s ability to deliver on its mandate. However, the majority of staff are working from home and the impact on them is not as severe as those who rely on the tools of trade attached by the sheriff,” he said.

The Pretoria News was told that the repossession of the state’s assets started on Thursday, with resistance from the workers, who were reluctant to let go of their resources.

Venkile said the department “has no dealings with Ehlers Attorneys”, adding that the law firm that sought the writ of execution against the department was Malao Attorneys Inc.

Mbalula said he was taken aback by the attachment of the state property by the sheriff. He had written to the department’s director-general, Alec Moemi, “to give a full account on this matter in order to establish whether there was negligence or dereliction of duty on any court matter that led to the attachment and removal of state property. Before any warrant of execution is actioned, due process is followed to alert the affected parties”.

Mbalula said the department would take the necessary steps to recover the assets and ensure service delivery was not adversely affected.

RAF spokesperson William Maphutha did not respond to questions seeking to clarify the entity’s legal wrangling with Ehlers Attorneys, including the entity’s failed bid to stop the removal and sale of the assets. He said the statement released by Mbalula “clarified the matter”.

Failure by the RAF to settle the payments was despite its chief executive, Collins Letsoalo, declaring that the entity had a surplus of R3.2 billion for the period ending March 1, 2021.

The court shot down Letsoalo’s narrative as “baseless” that the entity withheld the payment based on suspicion of impropriety on the part of the law firm.

The RAF also sought an order authorizing it to pay capital payments directly into the respondent’s clients’ bank accounts.

The court also ruled that it was “unheard of and unprecedented for the debtor to bypass the creditor’s attorney and pay directly to the creditor”.

The court found the RAF stance “puzzling” in light of information that the SAPS were still investigating the matter lodged with them by the applicant.

Deputy Sheriff Chris Jacobus refused to comment, saying he was bound by his oath of office not to talk to the media. Attempts to get comment from Ehlers Attorneys were also unsuccessful.