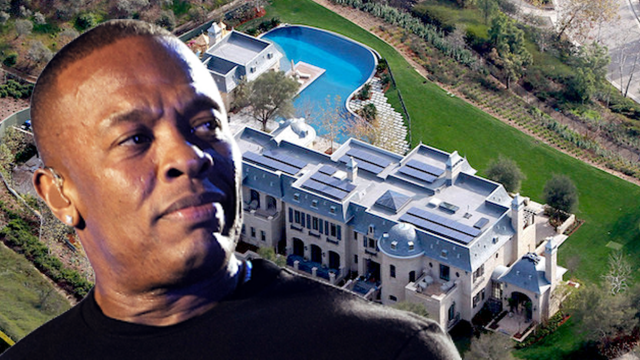 Dr Dre‘s house has been targeted by burglars while he was in the hospital with a brain aneurysm.

The 55-year-old hip hop icon was taken to the Cedars-Sinai Medical Center in Los Angeles on Monday after falling ill and on Tuesday, four people were reportedly arrested for trying to break into the music mogul’s home in Brentwood. An LAPD spokesperson told Billboard: Several individuals were hiking over a hill attempting to enter a property.

“They were confronted by six private security [officers] and they fled the location. As officers attempted to pull the vehicle over a short pursuit ensued.

The representative wouldn’t confirm it was Dre’s property they were trying to enter, but revealed they had been booked for attempted burglary.

According to reports, police were alerted after infrared cameras on Dre’s estate spotted the intruders scaling his fence, prompting his security team to alert officers.

The group fled the scene up a hill and jumped into a white SUV, leading cops on a chase through local streets before they were apprehended on Sunset Boulevard.

ABC 7 claimed police found a backpack filled with burglary tools such as saws and crowbars inside the cars.
The suspects have been identified as Raven Queen, 21, Monte Parker, 34, Daveon Crenshaw, 24 and Rayquan Ford, 25. It is not clear if they have been released on bond are still in custody.

Meanwhile, Dre – whose real name is Andre Young – has reassured fans he is on the mend following his hospitalisation.

He wrote on Instagram: “Thanks to my family, friends and fans for their interest and well wishes. I’m doing great and getting excellent care from my medical team.

“I will be out of the hospital and back home soon. Shout out to all the great medical professionals at Cedars. One Love!! (sic)”

Since the summer, he has been locked in a bitter divorce battle with estranged wife Nicole Young, with whom he has two children, 23-year-old son Truice and 19-year-old daughter Truly.