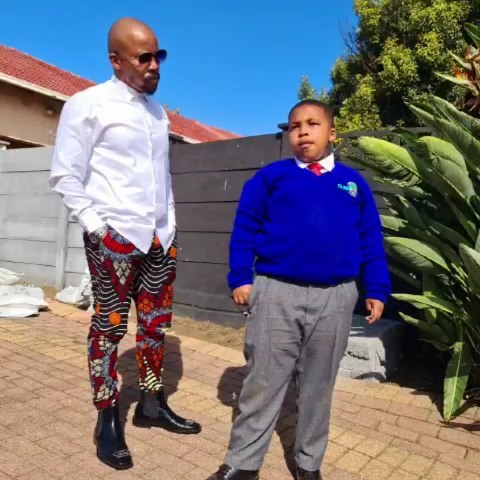 Many of us know him as Suffocate on eTV’s Rhythm City and it can be hard to marry his character to the person he is when the lights and cameras are away from him and he is not to switched onto his mysterious role.

It also does not help that the actor, who is now on the new Mzansi Magic Telenovela Diep City, does not share much about his life outside the small screen with the public. This is why, whenever he posts a picture or two to appreciate the people in his life, his fans pay attention and enjoy the content.

One thing we’ve observed from Mduduzi Mabaso is that he is a family man. The star has been married to his wife, Fatima, for 12 years and it all started when they business partners. Together they have four children namely Ntokozo, Mpumi, Njabulo, and Zolile.

In one of his recent posts on Instagram, Mabaso served some father and son goals when he shared a short clip of himself and his son. His caption was short and sweet, with the actor showing love and appreciation for his little boy.

His post definitely had some people in their feels, garnering lots of positive comments from his fans.

Katlego Charmaine wrote: “Ain’t nothing like a father’s love Thank you for being a remarkable example, Sir”

Stella Nkosi wrote: “Ncooo wish all fathers can their children in marriage n outside. They deserves to be cherished bethuna. We need to be attached to them emotionally as well”

Another follower by the name of, Macala Dladla, expressed his desire and longing for a father’s love in his life as his is now late, “How I wish kuthola uThando lukaBaba. ngyakuzonda ukufa”

The actor also served us husband goals from time to time. Having been married before and then going through a divorce, he never believed he would ever find love again, but all of that changed when he met his current wife Fatima.

Speaking to Move Magazine, the award-winning actor opened a bit about how his previous marriage affected his perspective towards women and love in general.
“I really don’t want to dwell too much on my previous marriage. All I can say is that it affected me to the point that I wanted nothing to do with women and I made a vow that I would never love again.” Said Mduduzi.

Mdu shared how Fatima was the main reason he gave love a second chance and the only woman who managed to change his negative views about women into positive ones.

The couple met on the set of Zone 14 and although they did not hit it off immediately, Mdu was quite intrigued about Fatima who worked with the production crew of the show. At first, Mdu thought Fatima was a bit snobbish but was curious as to why all the men in the production team were all charmed by her. The two eventually warmed up to each other and after getting acquainted for two months, Mdu knew that she was the one for him.

“I was pleasantly surprised when she started talking to me. I discovered that we had a lot in common and after two months, I knew that she was the one I wanted to grow old with. I asked her to marry me and the rest is history.”