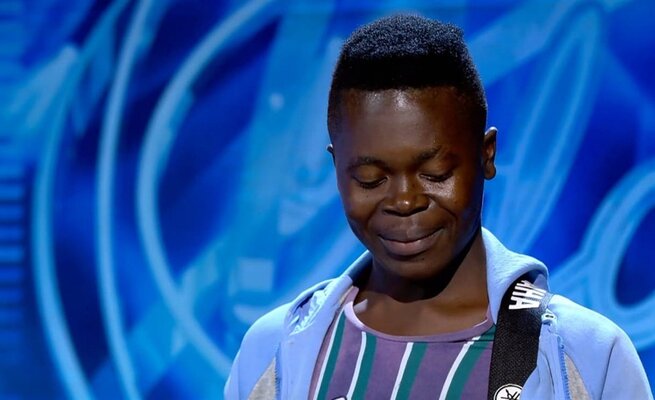 Ten months after Idols SA hopeful Vhudihawe Mamphwe blew away the judges with his composition My Yoki Yoki being a popular music star still sounds so unreal for him.

Mamphwe, 21, who immediately recorded and released the single on judges’ advice instantly won the hearts of many South Africans. His single shot straight to the number 1 spot on ITunes and Spotify, earning a global record. Though he was eliminated from the singing competition, the shy singer did not let the Idols setback to distract him from pursuing his passion and dream.

Since then the village boy from Venda in Limpopo immediately got elevated into a celebrity status, a life he never dreamt of. Though the life has changed for the better with him scoring gigs and media attention, it still sounds like a dream to the talented artist who can play piano, drums, guitar and bass guitar.

He actually does not like it when people refer to him as a celebrity.

“I’ve just started in the industry and I should not be regarded a celebrity. The thing is I still have a long way to go. This is just a start for me. I feel it is a little bit too ambitious and too early to use those words defining me. Everything that is happening to me just sounds unreal. I am enjoying the industry and I think this where I belong,” Mamphwe says.

The singer has launched his career officially with his debut titled My Yoki Yoki. It is packed with love, life and gospel songs that are sung in Venda, Zulu and English. The 13-track album is produced by one of the exciting producers around, Papi Nsenga.

The album is a combination of talent, excellence, upbringing and appreciation of life and love. He is also about to release his caller tunes globally.

“It is more like Afrosoul that is enhanced with the acoustic guitar. I chose this style because it suits my voice. The album is about life, love and there are gospel songs that speak to your soul. You see I am very shy person and I express myself better in music.”

The album opens up with a beautiful love song titled Uthando, featuring Idols 2015 winner Karabo Mogane, who is also Mamphwe’s idol. He had always wanted to work with Mogane, and when a chance presented itself while performing in Mpumalanga, he approached him for a possible collaboration.

“I have been following Karabo’s career and I wish to collaborate with him. I met him in Mpumalanga and I told him that we need to do something together and he agreed. For me he is the best singer and his voice is unique. I learned a lot while working with him,” he says.

My Yoki Yoki has tracks such as Ndi Kho Penga, Haho, Kondelela, You Are Beautiful, Smile, Hallelujah and Ndo Enda that tackle different subjects about life issues. The talented songwriter penned seven songs on the album long before he auditioned for Idols last year. He says though he has been playing different instruments at church, mainly taught by his pastor father, he realised after writing My Yoki Yoki that writing music was actually his bigger calling.

He says ideas for the songs come to him while sitting. He then starts interpreting the melody, using his guitar

Apart from music, Mamphwe is also second-year mechanical engineering student at a college in Pretoria. He says despite the demanding schedule for music, he is determined to finish his four-year degree.

“My father had been supportive all along though when I was doing grade 12 he wanted me to focus on my studies. When I completed my matric I went back to playing music again.

“I had his blessings and when I had to go to auditions he gave me the money and kept checking up on me. “He has told me that I have really surprised him in the past 10 months, as he had not expected my music career to get this far. He is very proud of me.”