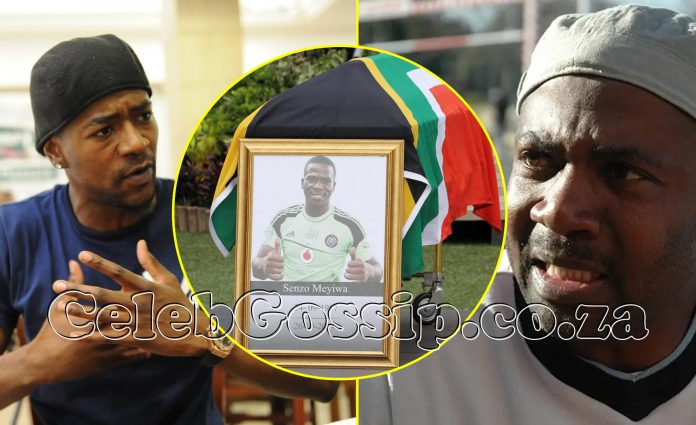 As the trial of five men accused of killing Bafana Bafana and Orlando Pirates goalkeeper Senzo Robert Meyiwa resumed in the Pretoria High Court after a two-month break, bombshells have been dropped left, right and centre.

Surrounded by controversy, Longwe Twala, a musician, is no stranger to media attention or a brush with the law.

He has been infamously tied to scandal after scandal, and his father, Chicco Twala, has publicly denounced his son for ruining his name.

Twala was in the home of Kelly Khumalo in Vosloorus when Meyiwa was gunned down on October 26, 2014, but it is alleged he ran away during the incident.

Kelly Khumalo was Meyiwa’s girlfriend and is the mother of his child.

Others present in the house on that fateful day with Meyiwa and Khumalo were Kelly’s younger sister, Zandile, their mother Ntombi (MaKhumalo), Twala, Meyiwa’s friends, Mthokozisi Thwala and Tumelo Madlala, and Kelly’s then 4-year-old son, Christian, and Thingo, Kelly’s daughter with Senzo.

On January 8, 2020, Twala was arrested on a charge of theft after he allegedly shoplifted toiletries worth R200 at a shop at The Glen Shopping Centre, south of Johannesburg.

He is alleged to have stolen items, including a Gillette razor, in October 2019. He failed to produce a receipt when he was apprehended by security guards at the mall.

At the time, it was previously reported the former child star had been battling drug addiction for more than 15 years and had been in and out of jail for several theft incidents.

His fed-up father previously said he had spent at least R1 million trying to rehabilitate his son.

It was also previously reported that Longwe is alleged to have stolen his father’s recording studio equipment worth R300 000. At the time, his father revealed Longwe stole a cell phone from a friend when he decided to hand him over to the Diepkloof police.

In a video that went viral in January 2020, Longwe was seen being scolded at the police station by his father, who hurled insults at him.

In the video, Chicco could be heard saying in the video he wished Longwe was responsible for Senzo Meyiwa’s death, so he could rot in jail.

“Senzo Meyiwa, stealing from people, drugs and all that. I can’t stand for this sh**,” he said.

This sensational claim was made by Siyabonga Miya, the former footballer’s cousin who became the family spokesperson since Meyiwa’s father Sam died in July 2019. This was after claims surfaced about Meyiwa’s alleged sexual relationship with Zandile.

At the time of his murder, Meyiwa was married to Mandisa Meyiwa.

Miya claimed that Meyiwa’s childhood friend, Tumelo, who had travelled to Gauteng to visit Meyiwa that weekend, called the family and uttered the words, “Zandi’s boyfriend has shot Senzo”.

“A call was made by Tumelo, the first call to the Meyiwa family, to say Senzo was shot. He said Zandile’s boyfriend, of which he did not know him by name, has shot Senzo. And then, in the background, Kelly was crying saying ‘kodwa ngizothini ku maka Senzo (what will I say to Senzo’s mom)’,” IOL previously reported.

This week, Madlala returned to the stand, where he was grilled to explain certain parts of his statement to advocate Timothy Thobane, who is representing four of the five accused men.

Thobane read a statement made by Madlala where he mentioned that he never told anyone that Longwe Twala killed Senzo Meyiwa as he was not carrying a gun on the day of the murder and ran away from the scene.

Madlala said he gave police a lot of statements, and he did not remember everything in detail.

During the previous sitting of the trial, Madlala dropped a bombshell, as he identified Ntanzi as one of the men who entered the house on the October 2014 night when Meyiwa was brutally killed.