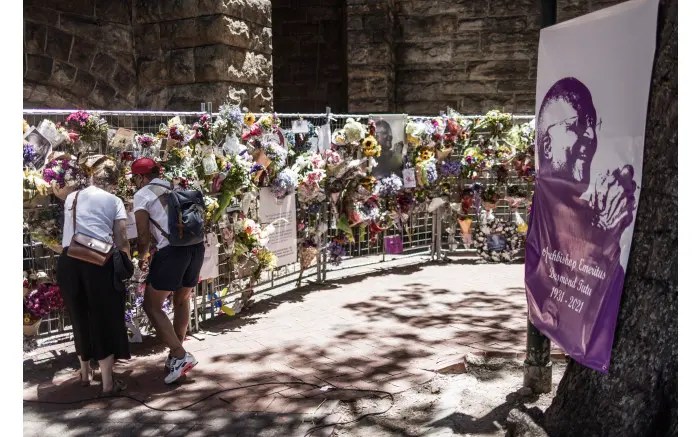 Archbishop Emeritus Desmond Tutu was laid to rest at dawn on Sunday in the Cape Town cathedral where he once preached against the brutal white-minority regime.

His ashes were “interred at St. George’s Cathedral in a private family service early today”, an Anglican Church statement said.

Archbishop Thabo Makgoba placed his remains under an inscribed memorial stone before the high altar.

He urged South Africans to “use this opportunity to turn a new page.

“Let us commit ourselves… to the radical, the revolutionary change that he advocated,” Makgoba said.

“Let us live as simply as he lived, exemplified by his pine coffin with rope handles.”

Some 20 members of Tutu’s family, led by his widow “Mama Leah” were present.

Famed for his modesty, Tutu had left instructions for a simple, no-frills funeral with a cheap coffin, followed by an eco-friendly flameless cremation.

Family, friends, clergy, and politicians had attended a requiem mass on Saturday with President Cyril Ramaphosa leading the tributes.

“Our departed father was a crusader in the struggle for freedom, for justice, for equality, and for peace, not just in South Africa… but around the world as well,” said Ramaphosa.

“While our beloved (Nelson Mandela) was the father of our democracy, Archbishop Tutu was the spiritual father of our new nation”, lauding him as “our moral compass and national conscience”.