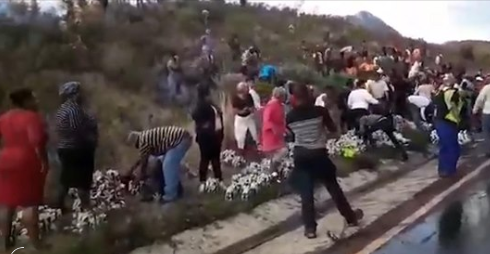 A truck driver was killed and another seriously injured when their vehicles collided on the R60 in Leeuriver near Swellendam in the Western Cape.

This, however, did not stop looters who descended on one of the vehicles and made off with alcohol that was loaded onto it.

It is believed one of the drivers lost control of his vehicle and collided with an oncoming truck. One of them then burst into flames.

Western Cape police spokesperson Captain FC van Wyk said: “The driver of the one vehicle succumbed in the fire and the other one was taken to a nearby hospital for medical treatment.”

The police have urged anyone with information about this fatal incident to contact Crime Stop on 08600 10111 or to contact the Swellendam police.